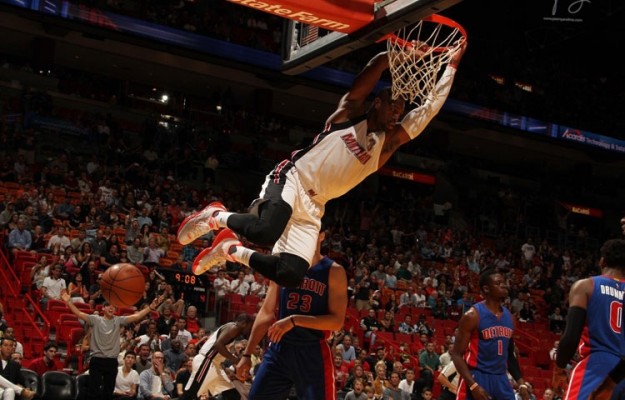 (Miami, FL) — The Miami Heat had two chances to put away the game late Tuesday night against the Detroit Pistons, as both Dwyane Wade and Chris Bosh missed opportune jumpers to give their team the lead.

With 2.9 seconds remaining in the game, Wade created separation from his defender and pulled up for one of his patented, leaning jump shots that hit the back of the iron.

“I’d love to have that shot back again,” Wade said after the game.

On the very next play, the Heat decided to foul Andre Drummond, who missed both free throws and gave the Heat another shot at taking the lead with just 1.1 seconds remaining in the game.

That led to a wide open jump shot for Bosh at the top of the key, which was just a little off to the right, as the Pistons came away with their 17th victory of the season, 93-92.

“They missed great shots,” Pistons coach Stan Van Gundy said. “I give our guys credit for fighting back to get in that game. I thought we played better defense in the second half. We did get the rebound on Wade’s shot, that was great. But let’s not go to the point of saying that we stopped them on the last two possessions. They missed great opportunities. Two Hall of Fame players missed shots.”

Wade finished the game with 19 points and five rebounds, while Bosh led all scorers with 20 points, three rebounds, and two assists.

Center Hassan Whiteside, who played superb defense all night (including a crucial rebound with 1.1 seconds remaining in the game off a Drummond free throw miss), collected another double-double on the year with 16 points, 16 rebounds, and four blocked shots.

“That one’s a tough one,” Heat coach Erik Spoelstra commented after the game. “They had a poor first quarter, we had a horrible second quarter and then it became an absolute grind-out, competitive basketball game.”

Next up, the Heat will take on the New Orleans Pelicans in Christmas Day action at American Airlines Arena. The game will be nationally televised on ESPN and expects to tip off around noon E/T.
[xyz-ihs snippet=”Responsive-Ad”]