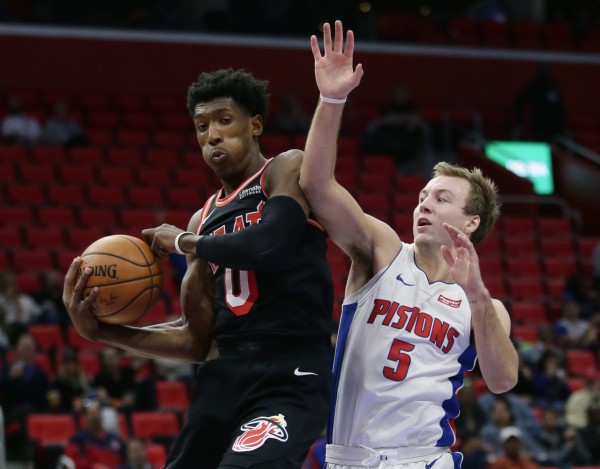 (Detroit, MI) — Running out of gas in the second half of the final game of a six-game road trip, the Miami Heat dropped a 112-103 decision to the Detroit Pistons at Little Caesars Arena on Sunday afternoon. The loss drops the Heat to 6-7 on the year, with their trip ending up even with three wins and losses each.

An early deadlock at 60 just after the halftime break led to a 13-2 run by the Heat that seemed to put them in control at 73-62 with seven minutes to go in the third. However, Detroit used five 3-pointers and a 16-9 advantage on the boards during the period to take an 83-81 lead into the final 12 minutes, while Miami was held to just two field goals over the latter half of the quarter.

“They were really able to capitalize on some numbers situations to set up open threes and they went on a roll on those seemingly every time,” Heat head coach Erik Spoelstra said after the game.

The game remained tight for the first four minutes of the fourth as the Pistons were clinging to a 93-92 lead, but the six minutes that followed ended any chances of a win. Detroit used a 16-5 run to open up a 109-97 lead with two minutes to go, with Miami never getting closer than seven points during a last-ditch comeback bid.

“We played okay for three quarters, but they changed to the second unit and they really elevated the tempo and that really hurt us,” Goran Dragic said. “They got some transition threes that we didn’t contest.”

Over the final 19 minutes of the game, the Pistons outscored the Heat 50-30. During the final quarter, fatigue was evident from the 33 percent shooting effort by Miami, while their second-half shooting touch from long-range simply disappeared by connecting on just 2-of-14 (14 percent) in that area.

“We’re a possession team and when we’re not taking care of the basketball, playing at an appropriate pace, controlling the glass, it hasn’t been a formula for success for us,” Spoelstra said.

Four of the five members of the Heat’s starting lineup reached double figures in scoring, led by Hassan Whiteside‘s double-double of 20 points and 12 rebounds. Right behind him was Dragic with 18 points and seven assists, Dion Waiters with 16 points and five assists and Josh Richardson with 15 points and five boards. The lone bench player for Miami to score in double digits was James Johnson with 10 points.

In the first quarter, the Heat held leads of five and seven points, the latter coming at 21-14. However, over the final 4:30 of the period, the Pistons used a 17-8 surge to hold a slim 31-29 lead by the time the horn had sounded. Most of the scoring damage by Miami during that period and the first half as a whole was done from deep on 11 3-pointers, shots that were aided by fluid ball movement that resulted in 15 assists over those 24 minutes of action.

The Pistons were able to keep pace by hitting seven 3-pointers of their own in the two quarters and had held a 46-42 lead with 5:28 to go before the half. At that point, the Heat managed to get a 14-3 run started, only to see the Pistons score six unanswered points. A pair of free throws from Dragic in the closing seconds managed to give Miami a 58-55 halftime advantage.

“I think we’re a better ball club now,” Spoelstra said in comparison to the team that left on the 13-day road trip. “Ultimately, that’s what you want. Of course, right now, we feel like we could have finished the road trip better.”

The Heat return home for a game on Wednesday night at American Airlines Arena as they host the Washington Wizards. Tipoff for this home-and-home matchup will be just after 7:30 p.m., with the return matchup coming two nights later when the Heat travels to Washington for a game beginning just after 7 p.m.
[xyz-ihs snippet=”Responsive-ImagenText”]