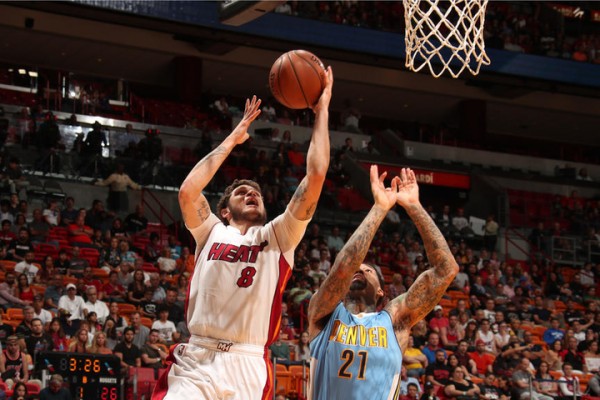 The Heat simply did not have an answer for the hot shooting of forward Danilo Gallinari, who led all scorers with 29 points (11-of-19 from the field and 3-of-7 from behind the arc) to go along with five rebounds and two assists.

For the second consecutive game, the Heat were unable to lead the game by more than a single point at any point during the contest.

Point guard Goran Dragic led the way for Miami with 22 points and six assists, while shooting guard Josh Richardson had 17 points (4-of-6 from three-point range) and three blocked shots.

“We were talking before the game that we needed to get back to our identity and play tough defense, but they came out and scored at will,” Dragic said. “We cannot win games if opponents are shooting 51 percent from the field.”

“We should’ve worked it a little more. When we try to play hero ball or guys try to come down and go one on three and get it stole or blocked, it’s hard to get back in transition,” Whiteside said. “Them guys are just pitching it. It’s hurting our offense, but we can’t get back on defense.”

After Johnson had hit a 3-pointer with just 10.8 seconds left that got the Heat to within a 114-113 deficit, Miami fouled Denver rookie shooting guard Jamal Murray, who made two free throws to put the Nuggets up by two. Richardson then missed a 3-pointer as time expired that would have forced overtime.

“This is like our playoffs right now and it’s been like that for awhile. Our guys are laying it all out there but just haven’t been able to get the job done the last couple games, so now we have to quiet the noise, let the guys take a day off tomorrow and get back to work on Tuesday,” Heat head coach Erik Spoelstra said during his postgame press conference.

With a mere five games left on their regular season schedule and in a current tie with the Indiana Pacers for the eighth and final playoff spot, the Heat will start a three-game road trip on Wednesday night when they take on the Charlotte Hornets (36-41) in a crucial game for both teams. The game is scheduled to tip off shortly after 7:00 p.m. ET at Spectrum Center and will be broadcast live locally on Fox Sports Sun.
[xyz-ihs snippet=”Responsive-ImagenText”]