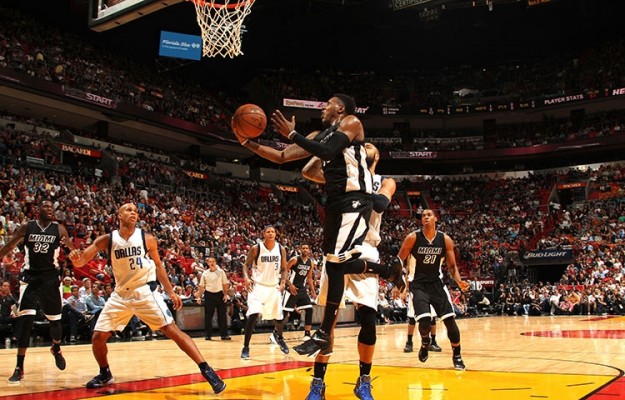 Despite leading the Mavericks for three full quarters, the Heat had another epic collapse in the third quarter. At the 7:08 mark of the third period, Miami led Dallas, 56-43. The Mavericks then proceeded to go on a 45-6 run capitalized by a J.J. Barea three pointer, which gave Dallas an 88-62 lead with 3:02 remaining in the fourth quarter.

Another blown lead and another home loss wasted another career performance by Hassan Whiteside. Whiteside posted 16 points and 24 rebounds in the game, the number of rebounds is the second-most by a Heat player in a game in franchise history. The 7-footer center grabbed 14 rebounds alone in the first quarter, when he came out of the game with four minutes remaining.

Despite another dominant performance by the 25-year-old, Miami received very little help elsewhere. While James Ennis had 15 points on 5-of-10 from the field, Chris Bosh scored 12 points on just 5-of-18 shooting. Mario Chalmers had 10 points on 3-of-11 efficiency while Danny Granger failed to post a single point despite starting at small forward in place of the injured Luol Deng.

During the Heat’s scoreless eight-minute stretch, Whiteside was on the bench from the 3:12 mark of the third until the 7:54 mark of the fourth quarter. The young center’s presence was sorely missed. He was asked following the game why he was on the bench, and how he felt during that stretch:

“You always want to play, everybody wants to play. That’s what it was, I really wanted to play but as you can see they went on a run, but that’s a question for coach (Spoelstra).”

As expected, Dwyane Wade sat out his first game following his hamstring injury versus the Milwaukee Bucks on Tuesday night.

Following the game, Erik Spoelstra was extremely frustrated due to another loss that resulted from a blown lead:

“The point is at some point you have to say this is enough. We don’t know how we get into these situations, but it will change.”

The Mavericks on the other hand, were led by balanced scoring paced by Charlie Villanueva’s 20 points off of the bench. Villanueva hit six of his seven field goals from beyond the arc. During the Mavericks’ dominating run, the power forward scored 13 points and established a remarkable plus-29 rating in the plus/minus department.

Tyson Chandler had a double-double with 11 points and 13 rebounds, while Dirk Nowitzki struggled offensively in scoring 12 points on 4-of-16 shooting.

The 72 total points and 33 percent shooting for the Heat marked their worst offensive performance of the season.

It was the Mavericks’ first victory over the Heat since defeating Miami in Game 6 of the 2011 NBA Finals.

The Heat will travel to Boston to play the Celtics to begin their four-game road trip on Sunday.

Despite their recent loss which dropped the Heat to six games below .500, coach Spoelstra is eager to begin the team’s next road trip:

“I think it (the road trip) looks promising. I wish we could play that game tomorrow. I wish we could fly out there and play tomorrow night. And let’s lace them up and get back after it. I think that would be the best thing for us is to get right back to competition and not dwell on this.”

Tip-off for the game is set for 1:00 pm EST at the TD Garden and it will be broadcast on Sun Sports.
[xyz-ihs snippet=”Responsive-Ad”]