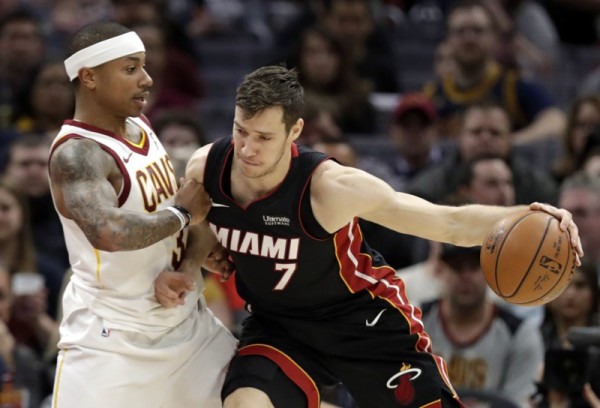 (Cleveland, OH) – The Miami Heat went into Wednesday night’s game against the Cleveland Cavaliers with an opportunity to prove their playoff pedigree. Just a half game behind the Cavs in the Eastern Conference standings, a win would have put Miami in third place in the East.

The Heat battled until the bitter end but unfortunately couldn’t capitalize on a last-second opportunity on their way to a 91-89 loss.

“There were a lot of things that I really liked about our team tonight. We did not play well at all offensively. It’s probably one of our poorer games on that side of the floor in a while,” Heat head coach Erik Spoelstra said following the game. “It was pretty surprising that we still had a chance there at the end, but our defense really stepped up. That’s what we’ve been talking about, so we’re going to stay with that road map right now because we’re putting together an identity that our guys are really starting to find some purpose with.”

With 12.0 seconds left on the clock, the Cavs were up just one point at 90-89, and had to inbound the ball to try to extend their lead. Tyler Johnson missed out on a huge play when he jumped LeBron James’ inbound pass and nearly stole the ball. The Heat guard seemed positive that he had flipped the possession arrow, but the initial call of Cavs’ ball was quickly confirmed.

After a successful inbound pass, Kyle Korver was sent to the free-throw line to try to ice the game for the Cavs with 7.0 seconds remaining.

Korver hit his first shot, but missed his second giving the Heat a chance. They quickly grabbed the rebound and without a timeout, began blitzing down the court to attempt a last-second shot.

Down just two points, the Heat could have tried for a game-winning 3-pointer, or attempt to force overtime with a two. James Johnson elected to try for overtime and drove into the paint looking for a last-second basket. Before he could even get up an attempt, however, the final horn blew and the contest was over.

“I was going downhill against him. I liked what I was doing, only thing is he’s LeBron,” the Heat forward said of the final play. “He made a great read and his defense prevailed that time. Gotta take it for what it is and tomorrow I’ll probably be doing 100 transition drills.”

Wednesday night’s game was one of the Heat’s worst shooting performances all season. They shot just 43.4 percent from the field and 10.7 percent from beyond the arc. They also shot poorly from the free-throw line, missing 11 of their 25 attempts in the game.

Despite the dismal shooting night, the Heat did see some strong performances. Josh Richardson helped keep the Heat in the game in the final frame, scoring nine of his 15 points in the fourth quarter. Goran Dragic had a solid night as well, leading the Heat in scoring with 18 points and six assists.

While Hassan Whiteside had a fairly quiet night statistically, he did cause a bit of drama with just under three minutes left in the first half when he and Cavs center Tristan Thompson got tangled up and had a bit of a shoving match. The Heat big man also made a dent in the Miami history books when he recorded a block in the third quarter. The play gave him 610 rejections with Miami, moving him into a tie with Rony Seikaly for third place on the all-time Heat shot-blockers list.

The Heat will look to bounce back from the loss when they travel to Philadelphia to take on the young, but talented 76ers on Friday night.
[xyz-ihs snippet=”HN-300×250-TextnImage”]