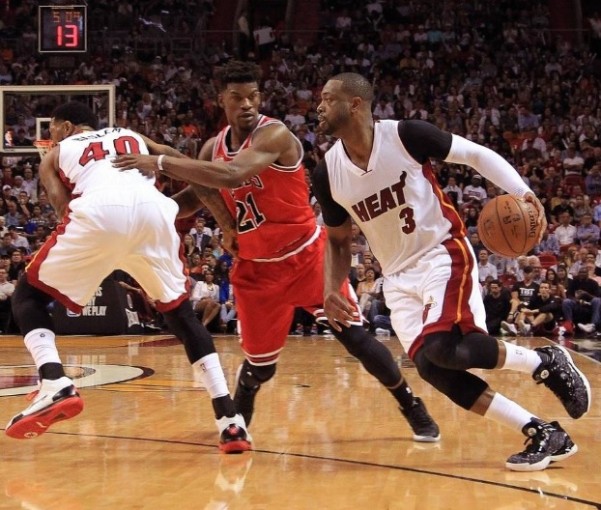 (Miami, FL) – A 25-14 run in the latter half of the fourth quarter helped the Miami Heat stay in the hunt for home-court advantage in the first round of the upcoming playoffs, as they held off a desperate Chicago Bulls team with a 106-98 victory on Thursday night at American Airlines Arena.

Miami trailed 84-81 when Josh Richardson connected on a pair of free throws with 6:07 left. That lit a spark for the Heat, with Amar’e Stoudemire’s layup with 4:59 remaining giving them the lead for good. Dwyane Wade and Hassan Whiteside then provided most of the offense down the stretch, scoring 15 of the team’s final 21 points.

“The crowd, the energy was amazing tonight, the kind that gets you ready for the playoffs,” Wade commented after the game. “This is the time of year you feel alive.”

Whiteside fouled out for the second time this season and spoke about his feeling of being targeted by officials:

“I really couldn’t sneeze on anybody tonight without it being a foul,” Whiteside said. “Guys see me as a threat. A lot of teams don’t really like me catching lobs.”

Wade led the Heat with 21 points, 10 coming during a third quarter that changed the momentum of the contest. Whiteside and Goran Dragic put up matching statistics to collect double-doubles with 16 points and 12 rebounds. Joe Johnson added 17, with the trio of Luol Deng, Richardson and Stoudemire also breaking double-figures in scoring.

Whiteside joked after the game about a third quarter situation in which the Bulls’ Doug McDermott was called for a flagrant foul after tackling the Heat’s center:

“If he didn’t do it, I was going dunk on him,” Whiteside said. “I saw the line of scrimmage. I got sacked for a loss of five. It was a good tackle.”

With regard to the playoffs, Miami is still trying to better its chances at a third or fourth seed. The win keeps them within one-half game of the third seed with four games left in the regular season.

Ahead of them is the Atlanta Hawks, who defeated the Toronto Raptors on Thursday. The Heat are now tied with the Boston Celtics for the fourth seed at 46-32. Meanwhile, the Bulls, who entered the game with their playoff hopes hanging by a threat, saw those hopes virtually come to an end with three games remaining.

In the first half, both sides put up virtually identical numbers in the first quarter, the Bulls had multiple five-point leads before the Heat closed within one at 22-21 by the end of the period.

In the second quarter, Chicago was able to maintain its lead, gaining a seven-point advantage at 35-28 midway through the period. Miami got to within two, but by intermission, the Bulls maintained a 46-40 advantage.

“We came into the half, corrected a few things and turned the energy up,” said Wade after the contest.

The Heat now head to Orlando for the first of two straight games against the Magic, the first contest tipping off at just after 7 p.m. ET on Friday night. That’s followed by a Sunday night matchup back at American Airlines Arena that will get going just after 6 p.m. ET.
[xyz-ihs snippet=”Responsive-Ad”]