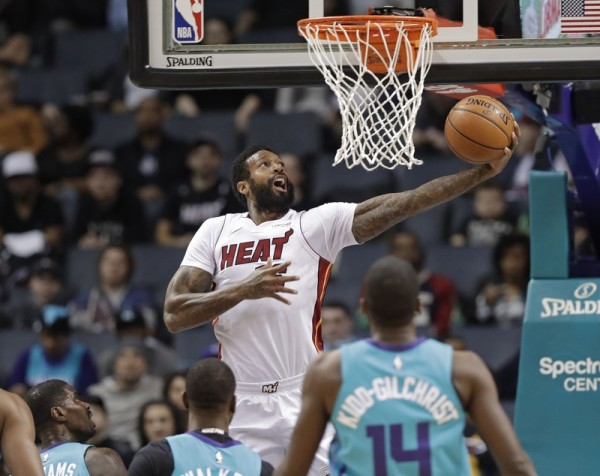 (Charlotte, NC) — Kelly Olynyk‘s free throw with 0.2 seconds to go in the game completed a dramatic last-minute comeback by the Miami Heat and allowed them to come away with a stunning 106-105 victory over the Charlotte Hornets at Spectrum Center on Saturday night.

Olynyk’s pair of 3-pointers had begun the final quarter and sliced the Heat deficit from 83-73 to just four at 83-79. However, the Hornets once again built the lead back up to 10 points at 101-91 with four minutes remaining.

The Heat then trailed 105-100 with 1:03 left in the game and turned the ball over with 50.6 seconds left. A turnover by the Hornets was followed by a James Johnson dunk with 34 seconds left, and a steal by Josh Richardson on the subsequent inbounds resulted in Johnson connecting from long-range to tie the game with 30.3 seconds left to play.

“I wasn’t expecting us to get to the rim and K.O. made a heck of a pass and J.J. finished in traffic,” Heat head coach Erik Spoelstra said about Johnson’s dunk. “I didn’t even see what happened after that, it all happened so fast.”

Charlotte had two chances to take the lead back, but missed both shot attempts. Olynyk’s rebound with 3.6 seconds left helped set up his heroics as he was then fouled by Dwight Howard with just 0.2 seconds remaining. That brought him to the line where he missed his first attempt before then hitting the game-winner. The Hornets were then unable to get off a final shot.

“That’s what you dream about. Man, that was a tough effort to climb back into that game, but guys made big-time plays, big-time shots,” Olynyk said after the game. “Just to be in that position, we we’re blessed and that’s what we needed on the road.”

Wayne Ellington paced the Heat with 26 points, while Johnson contributed a solid all-around game with 22 points, seven assists and six rebounds. Richardson followed with 17 points and five assists, with all but two of Olynyk’s 16 points on the evening coming in the final quarter. Olynyk’s 10 rebounds gave him a double-double, a feat that Hassan Whiteside matched with his 10 points and 14 rebounds.

“There were so many winning plays down the stretch. They had us down 10 late in the game and that’s just character. We’re a high-character team,” Ellington said. “We’re just going to continue to fight. That’s who we are.”

The Heat managed to pick up the victory without having the services of starting point guard Goran Dragic, who missed the game because of a left knee bruise. That was in addition to Tyler Johnson remaining out of the lineup because of a sprained left ankle.

“In the fourth quarter, we played way more free and easy than when we started the game,” Olynyk said. “I don’t know what the switch is for us, but we’re flowing and everybody’s touching it and we’re playing uptempo and being aggressive, we’re really tough to guard.”

The Heat remain on the road for their next contest, which will pit them against the potent Houston Rockets on Monday night. Tipoff for that clash will be just after 8 p.m. ET.
[xyz-ihs snippet=”HN-300×250-TextnImage”]