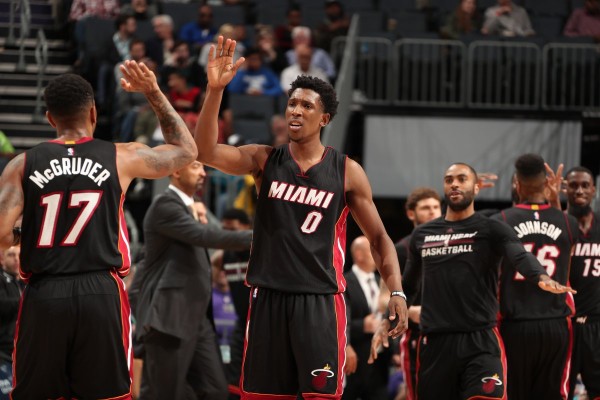 (Charlotte, NC) – Using 14 unanswered points in the third quarter and unleashing a total of 21 3-pointers, the Miami Heat came away with a crucial win over the Charlotte Hornets at Spectrum Center on Wednesday night. The win now puts the Heat in seventh place in the Eastern Conference, with the playoffs set to get underway late next week. The Heat, Indiana Pacers, and Chicago Bulls all currently have a record of 38-40 with four games to play.

The key stretch of the game began with just over nine minutes left in the third quarter and the Heat holding a slim 61-59 advantage. They proceeded to run off 14 unanswered points in less than four minutes and thrived over the remainder of the quarter, taking as much as a 17-point lead before heading into the final quarter with an 86-73 lead. In that final period, the Heat managed to never let the Hornets get close enough to pull off a comeback.

“We knew they were going to come out aggressive in the third quarter and we had to match that aggressiveness,” Goran Dragic said. “We played great tonight, the ball was moving side to side, we hit a lot of good open shots.”

During that third quarter, Miami’s defense held Charlotte to just 33 percent shooting from the field. However, it was that prowess from beyond the three-point line that played a key role in opening up the game for Erik Spoelstra’s squad.

“Our guys just brought a mindset to just do whatever they could, each guy to contribute at the end of the day,” Spoelstra said.

Dragic led all scorers with 33 points, including five triples, while also adding four assists. However, the performance of James Johnson was equally noteworthy, with the forward making his first start and delivering 26 points, four rebounds and three assists in the process. He contributed six 3-pointers to the team’s total and was 10-of-12 from the field. While Hassan Whiteside‘s double-double of 13 points and 19 rebounds set a new team single-season record in that category. Whiteside has now accomplished that feat 54 times this year.

“We knew what they were doing, packing the paint on our drives, on screen-and-rolls and we knew the sprays were going to be there,” Johnson said. “It was just up to the guys we sprayed it to to make the shot or make the next decision, and we were fortunate enough to hit shots.”

Also delivering for the Heat were Josh Richardson, who scored 19 points, grabbed six rebounds and dished out five assists, and Tyler Johnson, who notched 12 points. Richardson and Tyler Johnson were part of the three-point parade, tossing in four and three, respectively.

The 3-pointers set a new team record, but Spoelstra was happy about the team’s overall play:

“We only had eight turnovers,” Spoelstra said. “In order to get those open threes, you have to be aggressive, you have to execute with precision, to be able to get opportunities in the paint. Otherwise, defense isn’t going to help.”

In the first half, the Heat led for a good portion of the first quarter, aided by their 6-of-9 shooting from long-range by five different players. While Miami wasn’t quite as sharp in quarter number two, it was able to use the combined 31 points contributed by Dragic and James Johnson to cling to a 52-51 halftime lead.

“We both knew that both teams would be desperate during that first half. It was so competitive,” Spoelstra said. “One punch after another, both teams taking shots to the face and we just brought a great competitive disposition.”

The challenge continues for the Heat in their next outing, which will take place at Air Canada Centre in Toronto on Friday night, with tipoff set for just after 7:30 p.m. ET. However, two important contests that Miami will be watching tomorrow night have Indiana hosting the Milwaukee Bucks and Chicago traveling to Philadelphia.
[xyz-ihs snippet=”Responsive-ImagenText”]