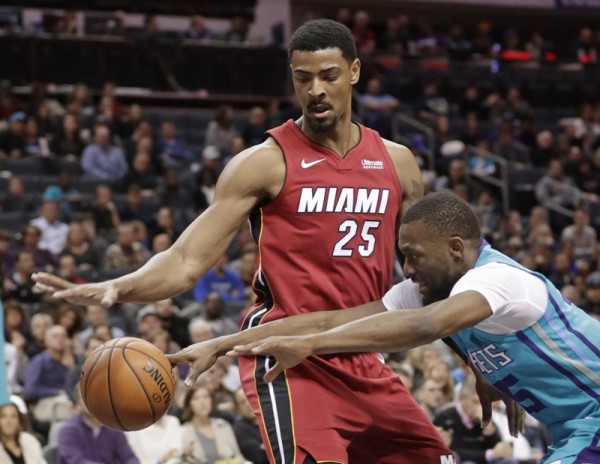 (Charlotte, NC)  –  The Miami Heat have been their own worst enemy numerous times this season, failing to make shots in crunch time and coming away with disappointing losses.

That was almost the case once again on Friday night when they faced off against the Charlotte Hornets. Despite leading for much of the game, it had become just a one-possession contest in the waning minutes. Thanks to some clutch plays on both sides of the court, however, the Heat were able to claim victory in the end, 104-98.

“That’s the NBA. Sometimes crazier things happen in this league,” Heat head coach Erik Spoelstra said following the victory. “Leads can go very fast. As soon as Kemba Walker hit that one three I turned to the bench and said, ‘Uh oh.’ Then he gets a fast break, two free throws, and bangs home another three and there you go, it’s a game. You have to be prepared to play a full 48 minutes.”

With just 8:46 left in the game, Miami looked to be well on its way to a victory as it was up 16 points at 91-75. As the Miami faithful have seen all season long, however, a cushion can never be large enough for this Heat squad.

In the following four minutes, the Hornets went on a 15-9 run to cut the lead to eight with 3:53 left in the game. Walker served as the catalyst for the Hornets’ comeback attempt and hit several huge shots in the waning minutes on his way to a 25-point, five-assist, and four-rebound night. While the Heat had found much success spreading around the ball throughout the game, they began to fall into an isolation-oriented offense and when their shots stopped falling, the home team sensed an opportunity.

Walker hit another huge three with just over three minutes left in the game to bring his team to within seven, and after both he and Dwight Howard, who dominated the Heat on the boards on his way to a 15-point and 16-rebound night, hit from the free-throw line, the Heat were looking at just a two-point lead, 100-98.

Thankfully, Dion Waiters came to the rescue. The shooting guard had failed to hit several shots in the final quarter of the game but with just over a minute left, he hit a massive 12-foot jumper to extend the lead to four and silence a raucous Spectrum Center crowd. The Hornets launched one more last-minute comeback attempt, but after Goran Dragic, who finished the game with eight points and seven assists, hit both shots from the line, the outcome was decided.

“This is the NBA, teams are really good. You got a guy like Kemba on their team, he’s a finisher,” Tyler Johnson said following the game. “When it gets down to crunch time, he’s gonna be ready, all we can do is weather the storm.”

Despite almost suffering another last-minute collapse, Miami had a lot of be proud of in the game. With Justise Winslow out with a knee injury and Hassan Whiteside still working to return from his lingering injury, center Jordan Mickey played valiantly in a relief role. Despite playing just 15 minutes in the game, Mickey finished the night with eight points and seven rebounds.

What stood out most in Friday’s game was the unselfish offense the Heat were able to run for the majority of the night. Johnson and Wayne Ellington shined off the bench once again and both finished with 16 points apiece.

“The ball is just going in,” Johnson joked about his strong night shooting the ball. “Just getting shots up that I feel comfortable with and when it comes off the fingertips it just continues into the hoop.”

One final positive note from the game was a milestone reached by Spoelstra. With Friday’s victory, Spoelstra notched his 454 career win as the Heat’s head coach, tying former coach and current team president Pat Riley.

The Heat will have a quick turnaround as the Los Angeles Clippers travel to Miami on Saturday night. The Heat will look to give themselves a winning record on the season in that game, and place their head coach firmly in the Heat history books.
[xyz-ihs snippet=”HN-300×250-TextnImage”]