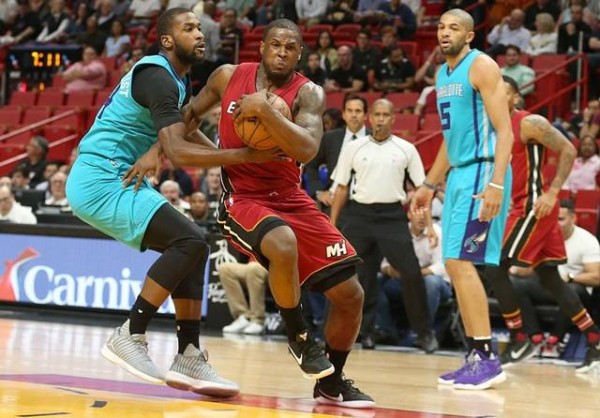 (Miami, FL) – In what continues to be a jaw-dropping turnaround to their season, the Miami Heat (31-34) fought tooth and nail with their Southeast Division rival Charlotte Hornets (28-36) on Wednesday night en route to a come-from-behind 108-101 victory at American Airlines Arena.

The Heat, who started the season at a dismal 11-30 mark well into mid-January, continue their trek as the hottest team in the NBA and have won 20 of their last 24 games to further solidify them as a threat in the Eastern Conference playoff picture.

“You have to continue to try to get better,” Heat coach Erik Spoelstra said during his postgame press conference. “Our game can still get to another two, three, four levels. Whatever it is, we’re not going to put a ceiling on it.”

Miami shooting guard Dion Waiters had a second straight game in which he took over down the stretch, as the former fourth-overall pick in the 2012 NBA Draft went off for a team-high 24 points, five assists and three rebounds.

Waiters’ backcourt partner Goran Dragic, who recorded his fifth double-double of the season, finished with an impressive 22 points (6-of-13 from the field and a perfect 9-of-9 from the free throw line) to go along with 10 assists and six rebounds.

“It says a lot about this team in that we never quit. We’ve had some ups and downs, a lot of players were injured or hurt. But, you know, we never complain. We just stick with our plan,” Dragic said.

Starting forward Luke Babbitt finished with 12 points on four made threes, while forward James Johnson came off the bench in a solid effort with 10 points, six rebounds, five assists and three blocked shots.

The Heat, who made a whopping 17-of-41 threes on the night, continue to be a dangerous threat with the playoffs looming.

“It’s just part of our work ethic,” Johnson said. “Everybody on this team has confidence in anybody who takes that three, and we move on regardless of what happens. When you have guys rooting for you to make shots or rooting for you to take shots, it just makes it easier.”

Wednesday night’s game was perfectly indicative of a game involving two teams frantically competing for a playoff spot, with the Heat finally being able to get the best of the Hornets for the first time this season.

For Charlotte, star point guard Kemba Walker led all scorers with 33 points (11-of-24 from the field, 5-of-11 from behind the arc and 6-of-6 from the charity stripe) and four boards, while shooting guard Nicolas Batum and small forward Marvin Williams had 16 and 14 points, respectively.

Up next, the Heat will remain at home when they host the Toronto Raptors (38-26) on Saturday night at American Airlines Arena. The contest, which is scheduled to tip off shortly after 8:00 p.m. ET, will be broadcast live locally on Fox Sports Sun.
[xyz-ihs snippet=”Responsive-ImagenText”]