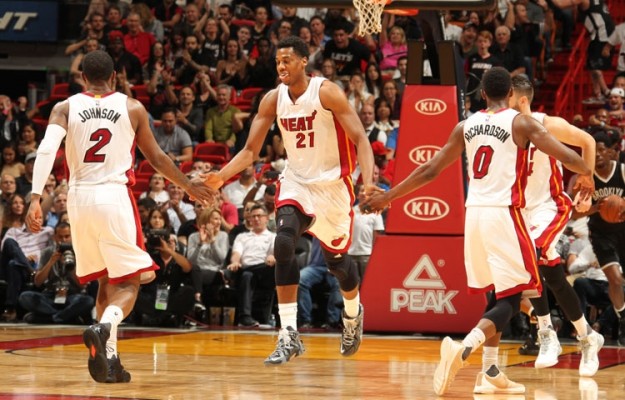 (Miami, FL) — Despite facing the lowly Brooklyn Nets (21-52), the Miami Heat (43-30) had to work a little harder than expected to acquire their season-high 13th win over .500. Without Goran Dragic (illness), Dwyane Wade and Hassan Whiteside picked up the slack by having one of their best games of the season to guide Miami to a 110-99 win over the Nets.

The Nets, second-to-last in the East, were at the Heat’s heels for the majority of the game. Former All-Star Brook Lopez led Brooklyn with eight points in the first quarter, a theme that would continue for the rest of the half. In addition to forcing two early fouls on Whiteside, the eight-year veteran had a strong first half with 16 points. Wade found his game early and led all scorers with 17 points at the break, a 57-52 lead for the Heat.

After the Nets got to within one at the beginning of the second half, Wade led the Heat on a furious 19-7 run. Scoring on a bevy of jumpers and floaters, the 34-year-old found his groove on the offensive end to accumulate 26 points by the end of the third quarter. Heat rookie Josh Richardson, who started in place of Dragic, chipped in with seven points to counter Thaddeus Young’s 12 that kept the Nets in the game at the end of the third quarter, 82-75.

While Brooklyn attempted to rally, Whiteside took over the game in the final quarter. The 7-footer scored 11 straight points for the Heat on his way to 15 fourth quarter points as the team began to pull away. Appearing to get the best of the skilled Lopez, the Heat’s big man got the last laugh of the center battle as Whiteside had a career-high 27 points and put the final touches on a 110-99 victory at home.

After the game Heat head coach Erik Spoelstra spoke about the win after the team had 25 assists:

“Guys are getting more aggressive, more confident but the ball is moving. It didn’t feel that it was self-willed, take turns type flow tonight, ” Spoelstra said. “The ball was popping, it wasn’t sticking on one side of the floor for any particular period of time and that’s when we’re at our best. But guys are getting more confidence and just getting off and letting somebody else play.”

Wade, who put up just 11 points vs. the Orlando Magic on Friday, bounced back with 30 points and nine assists on 14-of-19 shooting to help Miami win. The shooting guard spoke about taking the lead role tonight:

“I took it upon myself to be the one to attack tonight and kinda led our team doing that and I think we all followed. “

In addition to Wade’s dazzling performance, Whiteside finished with 27 points and eight rebounds on 12-of-16 shooting. Richardson, who got his second career NBA start, had 16 points, five rebounds, three assists and knocked down three triples. The Heat’s other rookie, Justise Winslow, helped out with 13 points and three rebounds off the bench. While Joe Johnson struggled from the field (1-of-7) against his former team, the forward gathered seven assists to help make up for Dragic’s loss.

For Brooklyn, Lopez led the way with 26 points and four rebounds but saw his impact stifle during the second half. Young had a strong game with 20 points, nine rebounds and three steals on 10-of-12 shooting.

With the victory, Miami stays in clear pursuit of the East’s third seed. The Atlanta Hawks (45-30), Boston Celtics (43-30) and Charlotte Hornets (42-31) are all in contention for the coveted spot as well, a race that could go down to the final game of the season.

The Heat have just nine games left on their schedule, starting with a three-game road trip that begins Wednesday against the Los Angeles Lakers. It will be Kobe Bryant’s last game ever against the Heat.