Miami Heat vs. Brooklyn Nets Game Recap: Back on Track 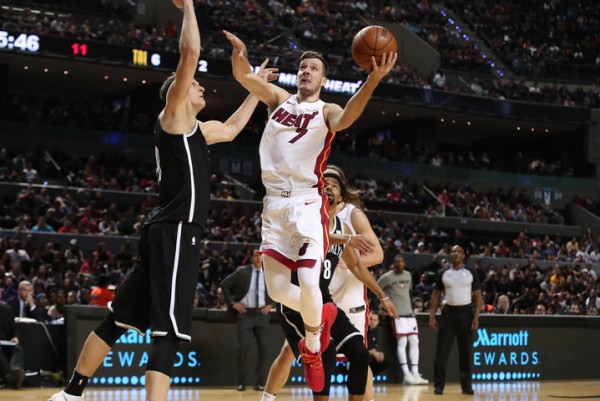 (Mexico City, MX) – After losing four of their last five games, the Miami Heat were in need of a morale-boosting victory on Saturday when they faced off against the Brooklyn Nets. While they started out the game slowly, the Heat managed to improve as the game progressed and put on a show in front of a raucous Mexico City Arena crowd on their way to a convincing victory, 101-89.

What stood out most in the game was the return of the Heat’s lockdown defense in the second half. Miami allowed the middling Nets to score 53 points in the first two quarters, but the Heat curbed that trend in the final two periods, holding their opponents to just 36 total points on their way to the easy win.

“Our defensive disposition and commitment on that side of the floor was much better. This was a possession game so this was going to have to be relatively physical, and then we executed down the stretch,” Heat head coach Erik Speolstra said following the win. “I thought as the game went on, when guys were probably more fatigued, we executed better.”

Heading into the final frame of the game, the Heat were in the lead, 75-52, but the game was still very much up for grabs. While Miami had struggled to start the previous three periods strongly, it took advantage of its slight lead and managed to build upon it in the fourth quarter.

Goran Dragic rebounded from his poor performance against the San Antonio Spurs and helped lead his team in the second half on his way to a 20-point, seven-rebound performance. Thanks to Dragic, Justise Winslow, who had a fantastic game coming off the bench and finished with 15 points on 5-for-6 shooting from the field and 4-for-4 shooting from beyond the arc, and Kelly Olynyk, who added 11 points, five rebounds, and three assists in the game, the Heat found themselves up 89-79 with just under seven minutes left in the game.

“In the second half we were just communicating and guys were getting in the right spots just by using our voices, so I think that played a big part in our defense in the second half,” Winslow said of his team’s defensive improvements before discussing his perfect performance from deep. “I just tried to knock it down and play with confidence, and my teammates, the whole season they’ve just been feeding me confidence and tonight I was just out there hooping.”

It looked as if the Heat were going to run way with the victory, but after the Nets hit several big shots in the waning minutes of the game, including a deep 3-pointer by point guard Spencer Dinwiddie, the Heat saw their double-digit advantage shrink to just four points. For a few moments another last-minute heartbreaker seemed possible for Miami, but after two Olynyk layups, the Heat retook control of the game.

James Johnson, who had 17 points, seven rebounds, and three assists as the starting power forward, put the game out of reach with an exclamation point when he spun into the lane and hammered home a vicious dunk, drawing cheers from the elated Mexico City crowd.

James Johnson with the throw down! #NBAMexicoGames

While Miami was able to secure the victory in textbook fashion down the stretch on Saturday night, the rest of the game was not as pretty. The Heat started off slow in the game and after nearly two scoreless minutes found themselves down 8-0. It appeared that the Heat were on their way to falling behind big in the game, but Winslow and Tyler Johnson, who scored 20 points on 8-for-11 shooting, helped keep their team within striking distance and eventually led a comeback.

“I just felt like I was in a really good rhythm from the other day,” Johnson said of his second big game in a row. “So I just wanted to come out and be aggressive. It was no particular game plan to take the certain shots that I do, it was just my teammates were able to find me in good positions to be successful.”

The night was one to celebrate for Heat fans and was as a special moment was captured when former Heat forward Chris Bosh, who watched the game from the stands, and Spoelstra embraced on the court.

The Heat won Saturday’s game with strong team-oriented play on both sides of the court, a promising sight after struggling in several recent performances. They will look to continue that trend and get back to .500 on the season when they travel to Memphis to take on Grizzlies on Monday night.
[xyz-ihs snippet=”HN-300×250-TextnImage”]