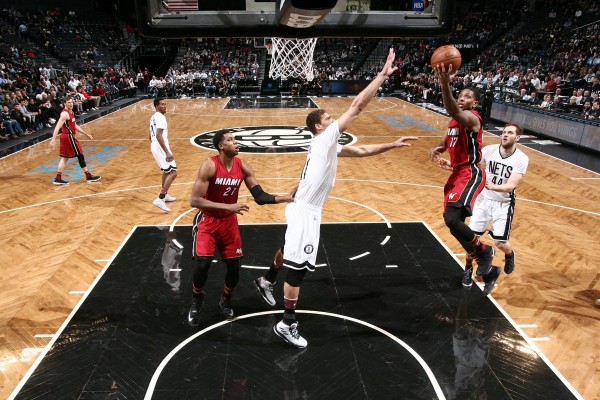 (Brooklyn, NY) – In what is still one of the most feel-good NBA stories in recent memory, the Miami Heat (24-30) managed to storm back from yet another double-digit deficit to defeat the Brooklyn Nets (9-45) on Friday night by a score of 108-99 at Barclays Center for their 13th straight victory.

“It wasn’t a matter of effort in the first half, it’s just we couldn’t get our game right against that kind of pace. In the second half, it just became about raw competition,” Heat head coach Erik Spoelstra said during his postgame press conference. “Inspiring play after inspiring play. We talk about that all the time. You go in their and do something that will multiply.”

Power forward James Johnson continued his brilliant play off the bench as he went off for a team-high 26 points (11-of-17 from the field), eight rebounds, three blocked shots and two assists in 35 minutes of action.

“We’re always resilient,” Johnson said immediately after the game. “The thing that stood out the most for me today in tonight’s win was just the locker room speech. How we got in the locker room, got collected, figured out our details and we came out and executed as a team.”

Heat point guard Goran Dragic, who continues to play the best basketball of his career, finished with 21 points (9-of-18 shots made from the floor) to go along with five assists and four boards.

“I liked the second half how we came out and played aggressively, especially defensively” Dragic said. “I don’t know what it is against Brooklyn, but they always take the lead against us and we come back. But I’m proud of our guys and how we came back.”

Miami small forward Rodney McGruder, who finished with a gritty 11 points and a game-high four steals on defense, was christened “The Scavenger” by Dragic after the game as a result of his stellar defensive play.

In addition, reserve guard Tyler Johnson came off the bench to score 18 points, grab six rebounds and record three steals, while power forward Okaro White (5-of-6 from the free throw line) scored in double figures with 10 points and five boards.

For the third time in three weeks, the Nets surrendered a manageable lead to the Heat that eventually resulted in a loss. Center Brook Lopez had a game-high 30 points, eight boards and two blocks for Brooklyn, while starting shooting guard Bojan Bogdanovic had 10 points and six boards.

In search of their 14th straight victory and continuing the longest winning streak of the 2016-17 NBA regular season, the Heat will play their fourth and final contest of a four-game road trip on Saturday night when they take on the Philadelphia 76ers (19-34) at Wells Fargo Center. The contest, which is scheduled to tip off shortly after 7:30 p.m. ET, will be broadcast live locally on Fox Sports Sun.
[xyz-ihs snippet=”Responsive-ImagenText”]