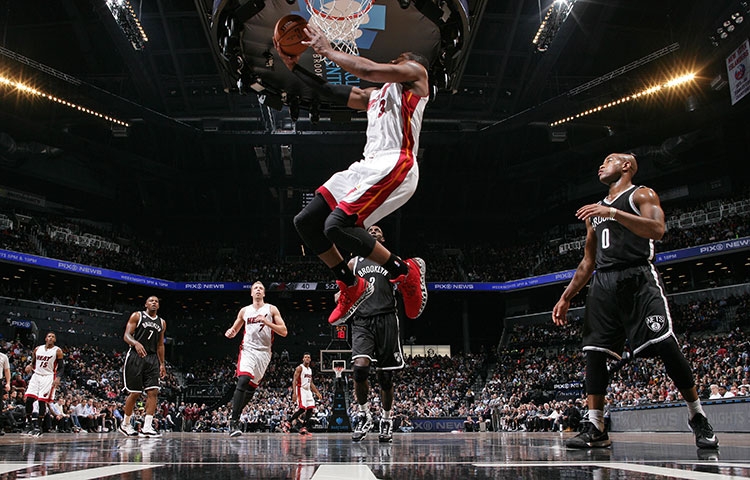 Despite being ill and telling reporters he ate only “three pieces of toast and two bananas,” Dwyane Wade carried the team on his shoulders, scoring 28 points to go along with five rebounds and four assists. He scored the first ten points for Miami in just five minutes of action and had his highest-scoring first quarter of the season with 12 points. Luol Deng also played well, finishing the night with 18 points, six rebounds, and four assists.

After the game, Wade commented on his need to perform despite being obviously ill:

“I had no choice. Chris Bosh is out; Josh McRoberts is out; Danny Granger is out…anybody who can go right now has to go, so you just gotta do your best. Whatever you have, you gotta give right now. I credit [my performance] to one of the Brooklyn fans. He said I’m too old and no one likes me. He made me focus in a little bit.”

The reserves had a combined total of 35 points and 11 rebounds off the bench, led by Shabazz Napier with 11 points and three rebounds. Mario Chalmers and Shawne Williams chipped in with ten points apiece.

The Heat and the Nets kept it close in the first quarter, with the Heat trailing three minutes before the buzzer, but Napier came through with the team’s first three and Deng followed with a shot from downtown that gave Miami a 24-21 lead. It was at this point that the roof of the Barclays Center started to leak causing a 29-minute delay in gameplay. Deng ended the quarter with a three pointer and solidified Miami’s lead, 33-25.

The second quarter was a struggle for Brooklyn, as the Heat continued to put up points. Miami enjoyed a 15-point lead at one point thanks to Norris Cole, before dropping it back down to ten at the half. Eight players from the Heat scored in the first half.

As usual, Miami struggled in the third quarter, letting Brooklyn go on a 12-0 run that diminished the Heat lead to just one at 58-57.

Miami did not give up their lead for the remainder of the game, and managed to end the quarter as it started: ten points ahead of the Nets.

In the fourth, the Nets gave it their best effort, and nearly caught up with Miami at the end of the game. They scored two threes in the final minute bringing the score to within two at 91-93, but with only seven seconds left on the clock, Jarrett Jack missed a layup and tarnished any hope remaining for the Nets to win the game. Mason Plumlee led the Nets with 21 points and nine rebounds, and Deron Williams was right behind him with 15 points and 11 assists.

After the game, Miami head coach Erik Spoelstra credited the Heat’s performance to their defense and ability of Wade:

“The guys are really competing and our best offense really either came off our defense or from throwing the ball to Dwyane in the post. We did have some relief buckets…some opportunities off of our stops. It just didn’t feel like we had as much pressure on our offense so we were able to get those stops. So that mentality is something we can build on moving forward.”

Notes: Danny Granger sat the game out due to an illness, Chris Bosh sat out with a strained calf, and Josh McRoberts sat out due to a season-ending torn meniscus. The Heat play the Utah Jazz tomorrow night in Miami at the American Airlines Arena. Tip-off is for 7:30 pm EST on Sun Sports.
[xyz-ihs snippet=”Responsive-Ad”]