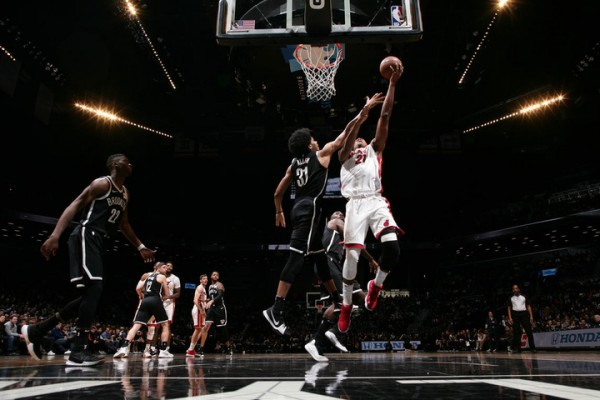 “Everything is not going to go your way, but we pride ourselves on our defense and it took us forever in that fourth quarter before we got a stop,” Heat head coach Erik Spoelstra said. “That’s just not a winning formula for us.”

Miami led, 65-58, with just under nine minutes left in the third quarter and seemed poised to extend the lead. As the quarter progressed, however, they went ice-cold and failed to make a single shot in the final 5:51 of the third period. The Nets took advantage of Miami’s inability to convert and scored 14 points in a row. By the start of the final frame the Heat were clinging to a two-point advantage, 69-67.

Seconds into the fourth quarter, Wayne Ellington, who struggled offensively and finished with just 10 points on 4-of-11 shooting, finally broke Miami’s scoring drought with a much-needed 3-pointer to push its lead to five points. The Nets quickly answered on the other end, but Justise Winslow scored on the Heat’s following offensive possession to give them a 74-69 advantage with just under 11 minutes left in the game.

Both teams traded shots over the next two minutes of play before Caris LeVert hit a clutch 3-pointer to give the Nets a 79-77 lead, their first lead since the first quarter. Moments later, Bam Adebayo brought the game back to a tie on Miami’s following offensive possession with a thunderous dunk.

“You’re up 16 against a team in the third quarter, there shouldn’t be no way they should come back from that,” Whiteside said following the game. “We gotta do a better job of playing with a lead. It shouldn’t have even came down to the fourth quarter.”

Miami threw the lead away seconds later, though, when Goran Dragic fouled DeMarre Carroll as he took a shot from the three-point line. Carroll hit all three attempts to bring the score back to a tie, 84-84. Kelly Olynyk answered on the other end, but Carroll managed to drive to the basket to tie the game back up. Then, less than minute later, Carroll hit a huge 3-pointer to give the Nets a three-point lead, 89-86. The Nets managed to extend their lead to four points, but the Heat were able to score four points in a row thanks to much-needed baskets by Dragic and James Johnson to bring the game back to a tie at 91-91 with just over two minutes left in the game.

The Heat had a great chance to get out of Brooklyn with the win, but when Spencer Dinwiddie gave Brooklyn a two-point advantage and electrified the crowd with a highlight reel dunk, it was clear which team wanted the victory more. LeVert then converted on two straight possessions and with 34 seconds left in the game, Brooklyn had a 97-91 advantage.

Miami made an attempt at the late-game comeback, but the Nets managed to seal the victory at the free-throw line, and dealt the visiting team its second loss in three games.

Miami let this game get away from it. While it was in great position to win for much of the night, it couldn’t convert when it mattered most. It will have less than 24 hours to learn from its mistakes as it travels to Charlotte tomorrow to face off against the Hornets in a clash of Southeast Division rivals.
[xyz-ihs snippet=”HN-300×250-TextnImage”]