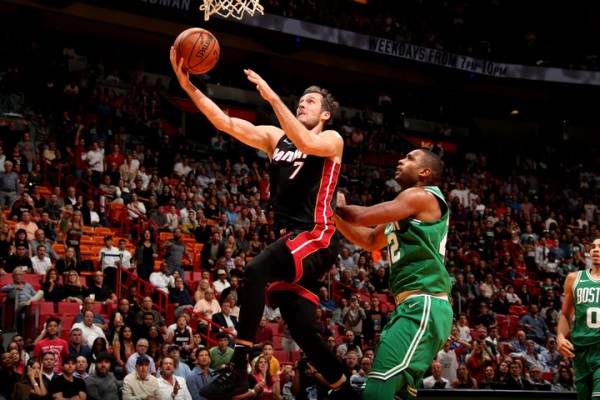 (Miami, FL) — An inability to stop Kyrie Irving in the closing moments proved fatal to the Miami Heat as their comeback effort fell short in a 96-90 contest to the Boston Celtics at American Airlines Arena on Saturday night. The loss means that the Heat are now 2-3 on the young season and marks their second consecutive defeat.

Trailing by just two at 88-86 with 1:53 left in the game after a basket by Goran Dragic, the Heat watched Irving score seven unanswered points, including a 3-pointer with 57 seconds remaining. That gave the Celtics a 93-86 advantage, which was then followed in the final 21 seconds by Irving adding two free throws and Al Horford splitting a pair of charity tosses to clinch the game.

“He’s (Irving) a great closer in this game,” Heat head coach Erik Spoelstra said after the game. “His handle allows him to get where he needs to be and his range makes you have to extend your defense quite a bit.”

Dragic led the Heat with 22 points and four assists, one of four Miami players to score in double figures. The frontcourt duo of James Johnson and Josh Richardson each finished with 16 points, with Johnson hauling down five rebounds. On the rebounding front, Justise Winslow (12) and former Celtic Kelly Olynyk (9) combined for 21 rebounds, with Olynyk also contributing 14 points on offense.

“The throwaway possessions on outlet passes, inbound passes, crosscourt passes really crush you,” Spoelstra said. “On top of that, to give up second chance points and loose balls, I think the difference was all those extra possessions.

Both teams managed to hold a lead during the opening period. The Heat took an early 7-2 lead, only to see the Celtics go on a 13-2 run to make it 15-9 in their favor. Over the final 5:46 of the first quarter, Miami managed to get back on track, courtesy of a 17-6 surge that allowed them to hold a 26-21 lead after the opening 12 minutes.

“Everybody was low energy until the fourth quarter, but it needs to be the whole game,” Dragic said. “The first unit, we didn’t play well, so we’re going to have to make some changes in our approach.”

The Heat held a five-point lead at 30-25 when the Celtics went on an 18-4 run, which began with 11 unanswered points and gave them a 43-34 lead. Eight of those points came from Marcus Smart, though by the time intermission arrived, Miami had whittled the margin down to just two points at 47-45.

“What you had was a throwback possession game where neither team was getting great looks,” Spoelstra said.

Just past the midway point of the third quarter, Boston had increased their lead to 11 points at 63-52 and was able to maintain that margin at 74-63 by the time the period had ended. The Heat had two final fourth-quarter surges, with Olynyk’s basket with 7:49 left completing a 12-4 run by the Heat to make it 78-75. Dragic then notched seven points late in the fourth to make it a two-point game before Irving’s late heroics.

“I don’t feel we played well at all. Defensively, you had too many open shots, too many points in the paint,” Dragic said. “Maybe that fourth quarter, when we were chasing them back, was a little bit better, but the game is 48 minutes. You can’t relax in the other quarters and think you’re going to be in games easily, so we need to bounce back.”

That next contest for the Heat will be at home on Monday night, when they host the Minnesota Timberwolves in a game that will tip off just after 7:30 p.m. ET.
[xyz-ihs snippet=”Responsive-ImagenText”]