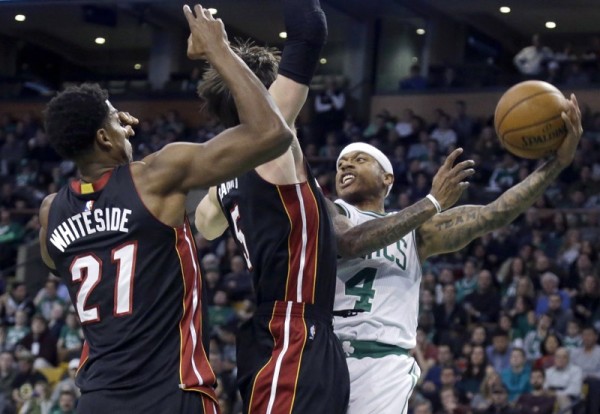 “We haven’t been able to close out games, and I think that’s probably been the most frustrating thing,” said Heat head coach Erik Spoelstra after the game.

The Heat, which led by as many as seven points in the second quarter, could not keep up with star point guard Isaiah Thomas and the Celtics in the second half.

Despite Thomas being the smallest player on the floor at just 5-foot-9, he made by far the biggest impact.

Thomas erupted for a career-high 52 points (15-of-26 from the field, 9-of-13 from behind the arc and a perfect 13-of-13 from the charity stripe) and scored a franchise-record 29 points in the fourth quarter alone, becoming only the fifth player in Celtics history to score over 50 points in a game.

“I don’t know, you just get in a zone and you feel like you’re in a gym by yourself shooting the shots that you work on,” said Thomas on his stellar performance. “It’s a blessing from God. You dream about things like that, especially playing for the Celtics getting MVP chants and all the great players that did it before me. It’s a blessing. I’m just going to keep going, and I can’t say enough about my teammates and my coach for putting me in the position to do the things that I do.”

In a back-and-forth game that featured 18 different lead changes, the Heat was unable to come out on top despite a gritty effort from its bench, which outscored the Celtics reserves by a wide 63-21 margin.

On defense, the Heat was unable to stop the Celtics’ hot shooting from behind the arc (17-of-32) and solid efficiency at the free-throw line (24-of-29). Miami, which hit 11 of its own 28 shots from three-point range, only managed to make seven of its 10 free throws attempted.

“We’re trying to develop this team and the players as much as possible,” Spoelstra said. “There’s a big ceiling with a lot of the guys. We’re all in the process every single day of getting this team better and developing. I’m invigorated by it, regardless of what the record is and that we’re able to step back, look at perspective and the big picture.”

Heat guard Josh Richardson had another solid game filling in as a starter for the injured point guard Goran Dragic, as he had 19 points (8-of-17 shots made from the field) to go along with a team-high eight assists, six rebounds and four steals.

Newly-acquired Celtics center Al Horford, who was the only other Boston player besides Thomas to score in double figures, had 21 points, six rebounds and four assists.

Up next, the Heat will return home on Sunday night to play its first game of 2017 when it takes on the Detroit Pistons (15-20) at AmericanAirlines Arena. The contest, which will tip off shortly after 6:00 p.m. ET, will be broadcast live locally on Fox Sports Sun.
[xyz-ihs snippet=”Responsive-ImagenText”]