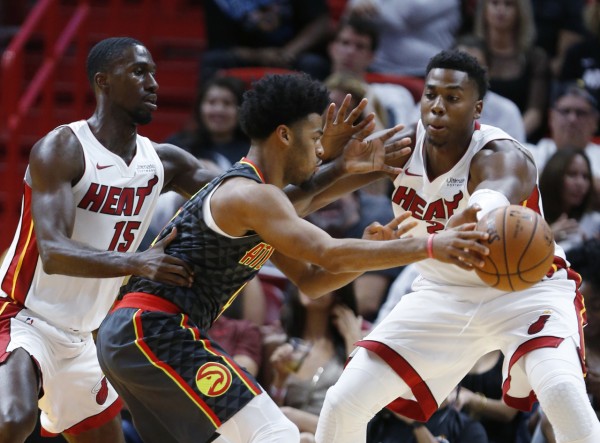 (Miami, FL) – With an upcoming 2017-18 regular season that will have high expectations, the Miami Heat (1-0) got their NBA preseason slate started on a positive note as they pulled away in the second half and held off the Atlanta Hawks (0-1) by a score of 96-90 on Sunday night at American Airlines Arena.

In a game dominated by defense, Miami blocked nine of Atlanta’s shots and held the Hawks to just over 35 percent shooting from the field.

Heat guard Josh Richardson, who came off the bench to score 12 points in 25 minutes of action, had four of Miami’s nine blocks on the night and enjoyed every one of them.

“I definitely, thoroughly, enjoyed those,” Richardson said of his several blocks on the evening. “I haven’t been able to do that for three months, so I’ve got to take advantage.”

Richardson also added that he was very happy to see the Miami fans in the crowd, as the Heat haven’t played a meaningful game in almost six months.

“It was great. We’ve got the best fans in the league,” Richardson said. “They always prove that, so we always want to come out here to play well for these guys and give them a good show.”

The Heat trailed 25-19 after the first quarter but were able to pull away on multiple occasions in the second half, as Miami led by as many as 14 points late in the fourth quarter and shot over 48 percent as a team.

In just 17 minutes off the Miami bench, guard Tyler Johnson led all scorers on the night with 14 points on an impressive 6-of-8 shots from the floor, while starting guard Rodney McGruder also scored in double figures with 10 points, four rebounds and four assists.

Heat star center Hassan Whiteside had eight points and 11 rebounds in just 19 minutes, while newly acquired center Kelly Olynyk (3-of-4 from the field) came off the bench for nine points, eight rebounds and five assists.

“Obviously it’s been well documented that he used to be a guard,” Heat head coach Erik Spoelstra said of Olynyk, a point guard in high school. “We want ultimately to play to his strength if it helps us.”

The game wasn’t all smooth sailing for the Heat, especially on offense as the team committed 22 turnovers and shot only 15-of-29 from the free-throw line.

Before the contest began, coach Spoelstra also commented that the team intends to continue locking arms during the national anthem like they did last year.

“We want our players to absolutely have a voice…and we encourage our guys to express themselves in the right way,” Spoelstra said.

Up next on their preseason schedule, the Heat will travel to take on guard D’Angelo Russell and the Brooklyn Nets at Barclays Center on Thursday night. The contest, which will tip off shortly after 7:30 p.m. ET, will be broadcast live locally on Fox Sports Sun and nationally on NBATV.
[xyz-ihs snippet=”Responsive-ImagenText”]