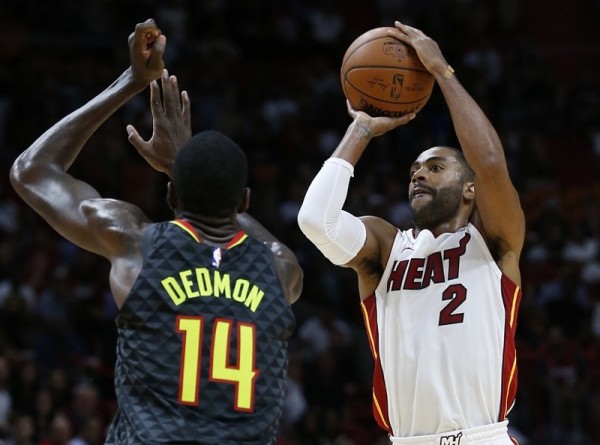 (Miami, FL) – On Monday night, the Miami Heat (2-1) got off to a great start on offense and held off a furious Atlanta Hawks (1-3) rally in the second half to capture a 104-93 victory at American Airlines Arena.

After they trailed by as many as 21 points early in the second half, the Hawks outscored the Heat 29-15 in the third quarter and actually tied the game at 77 apiece at the beginning of the final frame. The Heat starting off a hot 14-of-24 from three-point range, but they struggled mightily down the stretch and missed their last 13 attempts from behind the arc in the second half. Luckily, the Heat woke back up and went on a 17-6 fourth-quarter run to put the Hawks away for good.

“Some of our possessions weren’t organized with good spacing and we took a little bit of our foot off the pedal in terms of attacking,” Heat head coach Erik Spoelstra said during his postgame press conference. “If we’re attacking and being aggressive by trying to get into the paint, the other layers of our offense usually end up falling into place.”

Heat shooting guard Wayne Ellington, who tied a Miami franchise record for most 3-pointers made in one quarter, went 6-of-7 from behind the arc in the second quarter to help the Heat pull away to a 62-44 lead at the half.

“My teammates have been unbelievable with looking for me and trying to get me the ball to my spots,” Ellington said. “Coach (Spoelstra) instills so much confidence in me. I really appreciate those guys sincerely.”

Ellington, who finished with 20 points and two assists in 25 minutes off the bench, was happy to get things going with his shot during that first half.

“I put so many in this offseason, so it’s going to pay off,” Ellington said. “So I’m not worried at all, but this was a bit of a breakthrough for me tonight.”

In addition to Ellington, Josh Richardson had 21 points (8-of-17 from the field), four rebounds, two assists and two blocked shots in 37 minutes of action to help lead the way to victory for Miami.

“Atlanta’s a solid team. They’re a tough team. So when you get up, they’re always going to go on a run and always are going to fight back,” Richardson said. “We just had to grit our teeth and start getting stops. I think we relaxed a little bit and started settling a little bit, so we had to get back to attacking.”

This was the second straight game Miami star center Hassan Whiteside had to miss with a bruised left knee, but his teammates stepped up for him against the Hawks. Point guard Goran Dragic had 19 points and a team-high six assists, while center Kelly Olynyk came off the bench for a double-double with 10 points and 10 rebounds.

For the Hawks, they did not have the services of two starters in point guard Dennis Schroder and forward Ersan Ilyasova. Stepping up in their absences, Atlanta forwards Kent Bazemore and Taurean Prince each had a team-high 20 points on the night, while rookie power forward John Collins came off the bench with 14 points, 11 boards and two assists.

In the third quarter, things got physical between the Hawks and Heat when Prince shoved Dragic, which caused tempers to briefly flare. Prince was assessed a flagrant foul 1, while Dragic, guard Dion Waiters (10 points, four boards, and two steals) and Hawks center Dewayne Dedmon were given technical fouls for their roles in the incident.

“I always set tough screens,” Dragic said. “Maybe because his name is Prince he thinks he’s royalty or something.”

Up next, the Heat will play the third contest of their six-game homestand on Wednesday night when they host one of the Western Conference’s best teams in the San Antonio Spurs (2-0) at American Airlines Arena. The game, which is scheduled to tip off shortly after 8 p.m. ET, will be broadcast nationally on ESPN and locally on Fox Sports Sun.
[xyz-ihs snippet=”Responsive-ImagenText”]