Miami Heat vs. Atlanta Hawks Game Preview: Heat Look To Get Back To Winning Ways 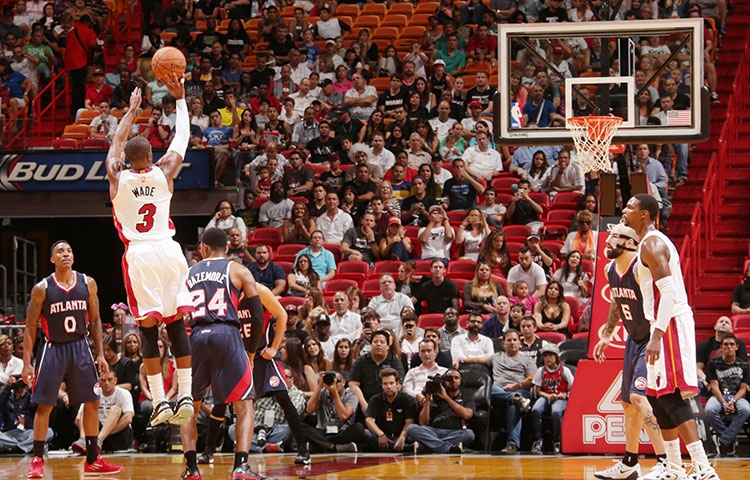 (Atlanta, GA) — On Friday night, the Miami Heat (5-3) travel to Philips Arena to play the Atlanta Hawks (4-3) in a matchup of Southeast Division rivals.

The Heat look to get back on winning track following a 81-75 loss to the Indiana Pacers on Wednesday night. Despite Indiana being shorthanded due to injuries to starters George Hill and David West, they outworked the Heat on their way to winning the rebounding battle, 53-28. The rebounding advantage was highlighted by Roy Hibbert’s 15 boards, in addition to his 16 points scored.

Dwyane Wade, who scored a game-high 20 points for the Heat, expressed disappointment over the team’s loss to the 3-6 Pacers:

“You have to figure out a way to pull a few of these games out throughout the year. We didn’t do that tonight, but hopefully next time we’re in this situation we learn from tonight and we figure out a way.”

Miami not only struggled on the glass, but they were also underwhelmed in the free-throw shooting department, converting on just 8-of-18 free throws attempted. Wade’s struggles were the most glaring, as he went 3-of-7 from the charity stripe.

For the first time all season, Chris Bosh failed to score at least 20 points in a game. He went 3-of-13 from the field, en route to just nine points in easily his worst game of the year. Bosh stated the following in regards to the offense’s struggles:

“This offense is predicated on ball movement. And they really flattened us out.”

While the Heat were flat in their previous game, the Hawks on the other hand, defeated the Utah Jazz, 100-97. There were 18 lead changes throughout the game, with the final lead change occurring on a Kyle Korver three-pointer with just under a minute remaining. That shot gave the Hawks a 98-97 lead they would never relinquish.

Korver scored 17 points with 10 rebounds, while Paul Milsap provided a game-high 30 points and 17 rebounds to lead Atlanta to their third straight victory.

Milsap commented on his superb performance following the victory:

“I was really just going after the ball and being aggressive. I just got back to doing the things that got me here — getting dirty and getting rebounds.”

With both teams being just about evenly matched in the standings, the winner of this game will be firmly entrenched in second place in the division.

Not only do both of these teams have three losses each, but both squads are subpar in the rebounding department–the Heat are second-to-last in the league in rebounds per game, while the Hawks rank 24th.

Despite the return of Chris Andersen versus the Pacers, Miami still struggled grabbing rebounds versus an undermanned Pacers team. Simply put, that is a cause for concern. The Heat allowed 16 offensive rebounds in the loss to Indiana.

Bosh cites the team’s rebounding woes due to a lack of aggression, via Ira Winderman of The Sun Sentinel:

Wade feels this has been an issue plaguing the franchise for years, via Winderman:

“Rebounding has been an issue for so many years. I’ve been here for that story….It’s always been an issue. We have moments. Like in the first half of the Dallas game, it was an issue. I thought we did a better job in the second half collecting ourselves…you can’t lose like that on the glass and expect to win.”

The lack of rebounding could present an issue versus a team such as the Hawks. Korver is shooting 55 percent from beyond the arc, which is the fourth-best mark in the league. The sharpshooter holds the NBA record for most consecutive games (127) with a 3-pointer.

Offensive rebounds leading into three-pointers would spell disaster for the Heat. Atlanta is the best 3-point shooting team in the league, at just a shade under 41 percent.

Bosh stressed the importance of not allowing second-chance points versus Korver and the Hawks: