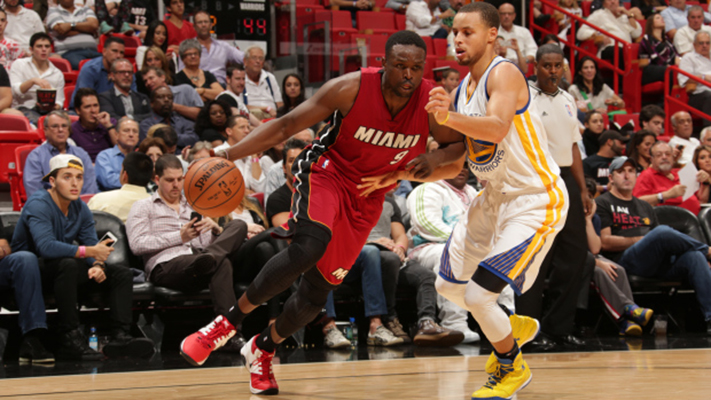 (Oakland, CA) – The Miami Heat (17-21) can secure a winning record on their five-game West Coast road trip with a victory over the Golden State Warriors (30-5) tonight at Oracle Arena in Oakland, California, but they may have to do so without superstar Dwyane Wade.

The star guard strained his left hamstring early in last night’s win against the Los Angeles Lakers, and after playing through the discomfort for a couple of possessions, he left for good midway through the second quarter.

He is listed as day-to-day.

“I could have played, but I decided to be smart this time and catch it early and not make it any worse,” Wade told reporters after the game.

Wade missed seven games earlier this season with a strain in the same area.

He also played strong defense against the Lakers, recording five blocks and harassing shooting guard Kobe Bryant into some tough shots down the stretch.

Whiteside had 38 points, 25 rebounds and seven blocks in two games in Los Angeles, but he is not letting his recent success get to his head.

.@YoungWhiteside (15pts 9rebs 5blks): “I’m here to do whatever coach needs. If he tells me to run to the airport right now I’m going.”

Point guard Mario Chalmers led all scorers with 19 points – including nine in the fourth quarter as the Lakers mounted a comeback– and handed out eight assists.

“Rio is not afraid of that moment. He played big down the stretch,” said coach Erik Spoelstra of Chalmers’ game. “This may have been our most tough-minded win of the season. We’ve been waiting on this.”

The Golden State Warriors come into tonight’s matchup with the Heat sporting the best record in the league and on a seven-game winning streak.

The Warriors are led by perhaps the best backcourt in the NBA, point guard and MVP-candidate Stephen Curry and shooting guard Klay Thompson. Both players score more than 20 points per game.

As a team, the Warriors have the highest-scoring offense in the league (109.4 ppg) and are the best passing team as well, averaging just under 27 assists per game. Warriors center Andrew Bogut credits first-year head coach Steve Kerr’s pass-first philosophy for his team’s potent offense.

Andrew Bogut: “Coach Kerr’s emphasis on moving the ball has really helped us. We have possessions now where we move ball 5, 6, 7, 8 times.”

This will be the second and final meeting between the Heat and Warriors this season. Golden State beat the Heat in Miami, 114-97, last November.

Tonight’s game will be the second night of a back-to-back for both teams. The Warriors beat the Utah Jazz in Salt Lake City Tuesday night, 116-105.

A win tonight or Friday night against the Sacramento Kings would guarantee a winning record for the Heat on their road trip along the Pacific Coast.

That seemed improbable a week ago when they flew into Portland to face the Trail Blazers, considering the Heat’s opponents at the time had a combined record of 106-70 and a winning percentage of .602.

Tipoff is set for 10:30 PM E/T and the game will be broadcast on Sun Sports.
[xyz-ihs snippet=”Responsive-ImagenText”]