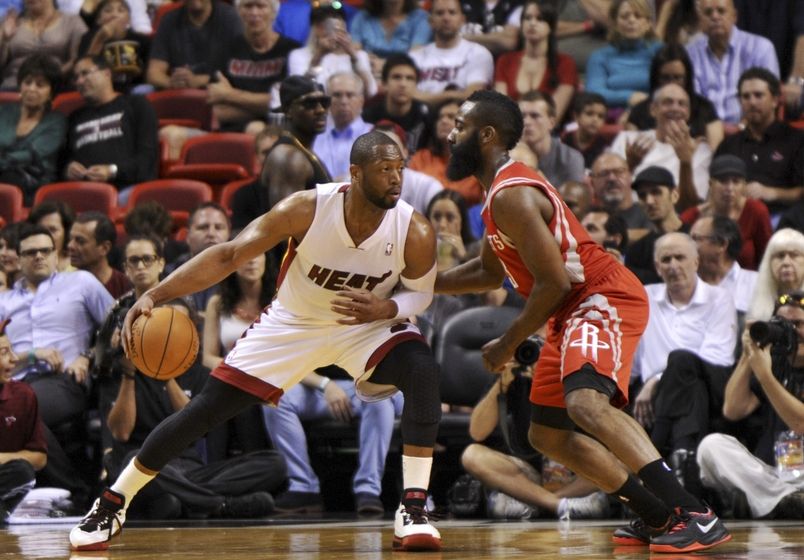 The Heat have lost three in a row and seven of their last ten games.

Making matters worse, the Heat managed to win only two games during their recent eight-game home stand and will now embark on a six-game road trip out West (the Heat will travel back to Miami to play the Brooklyn Nets on Sunday before flying to Portland for the first of five straight games against teams on the West Coast).

The play of superstar guard Dwyane Wade has been one of the few bright spots during an otherwise dismal stretch of basketball for the Heat. The eleven-year veteran is averaging 26.6 points, 5.1 assists and 4.1 rebounds over his last 10 games.

“Rebirth? No, I don’t feel reborn. Just different opportunities, and trying to make the best of those opportunities, more than anything,” Wade told reporters in Miami following team practice on Friday.

Despite his recent string of stellar performances, Wade is disappointed in his team’s lack of success.

“Nothing I can do about that. I want to win more than anything. I want to win ballgames. I’m going to have to continue to play well for us to do that. There are some nights where it’s just not going to be there…but over the course of the season, I try to be efficient and consistent,” said Wade.

Wade will get help from Heat center Chris Bosh, who will play in his third straight game after missing the team’s previous eight with a calf strain.

Though he has played well since his return, Bosh realizes it will take time for the injury-riddled Heat to gel.

“We do have to have some stability and some kind of comfort with the guys out there so we can move forward building some continuity and chemistry,” said Bosh on Friday.

As for facing the new-look Rockets, who added the talented but mercurial former Detroit Pistons forward Josh Smith to their roster last week, Bosh says his team must be up to the challenge on both ends of the court.

“Of course they’re going to be athletic. [Josh Smith] is very talented as far as handling the ball, getting guys involved, a very underrated passer. He gives them another shot blocker, another defensive dynamic,” Bosh stated after Friday’s practice.

Bosh acknowledged Smith’s versatility on the offensive end as well.

“On offense, he’s going to be in a bunch of different spots. He’s kind of like a wild card”

Heat coach Erik Spoelstra told reporters before leaving for Houston Friday that he wants to have a positive beginning to the New Year, starting with the team’s practice sessions.

“We want to start off the year on a good note. It’s more about our mindset right now. We have to focus on controlling things from here on, and our first approach was today in practice correcting some specific things [and] details of where we need to get better,” said Spoelstra.

Saturday night’s game will be the second of a back-to-back set for the Rockets, who lost badly to the New Orleans Pelicans at the Smoothie King Center Friday night.

This will also be the second and final matchup of the season between Miami and Houston. The Rockets trounced the Heat at America Airlines Arena in early November, 108-91.

The Miami Heat are currently eighth in the Eastern Conference standings, while the Rockets are fifth in the ultra-competitive West.

Tipoff is set for 8 PM EST from the Toyota Center in Houston and the game will be broadcast on Sun Sports.
[xyz-ihs snippet=”Responsive-Ad”]