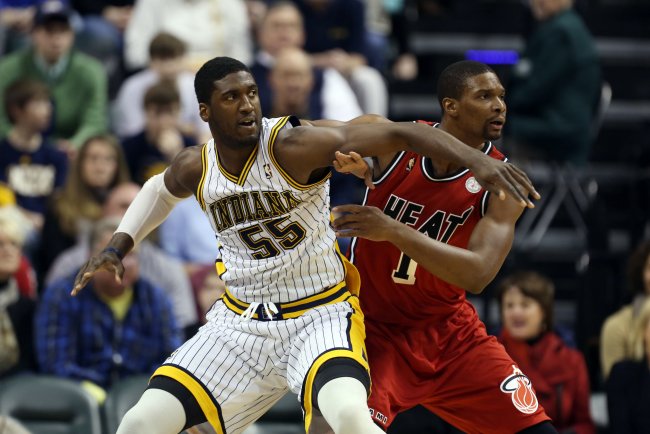 (Miami, FL) — The Miami Heat (5-2) host the Indiana Pacers (2-6) at the American Airlines Arena on Wednesday night in a rematch of last year’s Eastern Conference Finals.

While a lot of the big names are gone from the past several years of the rivalry including LeBron James, Ray Allen, Lance Stephenson and Paul George (injury), key figures such as Dwyane Wade, Chris Bosh and Roy Hibbert are still around.

Despite losing LeBron through free agency, the Heat have done just fine during the start of the post-LBJ era. The team is 5-2, including two straight victories, with the last one coming versus a tough Dallas Mavericks team on Sunday. The Heat shot a season-best 55.3 percent in the win over the Mavs.

However, Erik Spoelstra claims there is still work to be done:

“We’re trying to develop habits right now, and at the end of the day it always looks better when the ball goes in. Over the course of a long season, if you’re building those habits, you hope that there’s a karma to that. Guys are starting to see the benefits of playing together.”

Meanwhile, the Pacers hardly resemble the team that clinched the No. 1 seed in the East last season. The team continues to struggle in the absence of their franchise player, George. The team ended its six-game losing streak by defeating the Utah Jazz on Monday, 97-86. To make matters more troublesome, star forward David West and starter George Hill have yet to play.

Scoring has been a major problem for this squad, as the offensive unit has been averaging just 93 points per game, 25th in the NBA. They also continue to struggle in moving the basketball, ranking dead-last in assists with just 18.4 a game.

“I look at us as a young team just because everybody is new to their role, and any kind of success can be a confidence builder. Build on the things we are doing well. Just understand that we can be better and correct the things we are not doing well enough.”

Though the starting lineups will look different, this is still a matchup of two teams that met in the playoffs for three consecutive seasons. Miami defeated Indiana 4-2 in the Eastern Semis in 2012, before knocking off the Pacers in the Eastern Conference Finals in the following two seasons.

It was one of the NBA’s best rivalries during that time frame, despite the Pacers failing to win a single series versus the ‘Big Three’ Heat.

As Indiana continues to struggle due to injuries and a lack of ball movement, Miami continues to thrive despite injuries to their front line. To top matters off, the Heat are moving the ball just fine– the team ranks third in the NBA with 23.9 assists per game, and had 31 assists on 42 field goals made in the win over Dallas.

D-Wade is a huge reason for the team’s play through seven games. After playing just three back-to-back sets during the 2013-14 season, Wade has played in all three of the Heat’s sets this season. On two occasions, Wade has notched a double-double in the latter game of those sets.

“I really respect how much time he puts in behind the scenes. His body is responding.”

Due to the injuries suffered by Indiana, Chris Copeland leads the Pacers in scoring with 15.4 points per game. A.J. Price, who is on a 10-day contract with the franchise, scored 22 points in the win over the Jazz. He’s averaging 12.0 points per contest in three games played.

Tip-off is set for 7:30 EST and the game will be broadcast on ESPN and Sun Sports.
[xyz-ihs snippet=”Responsive-ImagenText”]