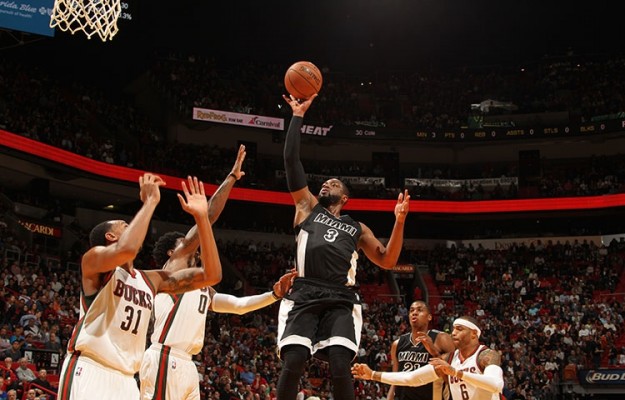 Wade had 12 points, four assists and two steals in 19 minutes of play, but he left the game less than three minutes into the second half with a right hamstring strain and did not return.

Wade has missed several games this season due to hamstring problems, including the final two games of the Heat’s recent West Coast road trip.

Coach Erik Spoelstra told reporters after the game the extent of the injury is not yet known: “We don’t know how bad it is at this point right now. We’ll know more tomorrow.”

The Heat were already down two starters before the game tipped off, with small forward Luol Deng out with a calf injury and frontcourt teammate Chris Andersen sitting with a sore back and elbow.

Center Hassan Whiteside, who started in place of Andersen, had another strong performance with 16 points and 16 rebounds in 36 minutes.

The first half was a back-and-forth affair, with Milwaukee pushing ahead 54-50 with a late second quarter burst.

Trailing the Bucks by four points coming out of halftime, the Heat seemed to rally for several minutes after Wade went to the locker room.

Point guard Mario Chalmers scored 12 of his 21 points in the third quarter and helped the Heat turn the deficit into a 10-point advantage. Chalmers also had eight assists for the game.

But the Bucks outscored the Heat 14-4 in the final four minutes of the third quarter and tied the game heading into the fourth.

Milwaukee used a balanced scoring attack against the Heat to regain the lead early in the final quarter and never looked back.

Seven players scored in double digits for the Bucks, led by guards Brandon Knight and Khris Middleton, who each had 17.

Center Chris Bosh led all scorers with 26 points, but while every Heat starter had at least 10 points in the game, Miami’s depleted bench was outscored by Milwaukee’s reserves 54-13.

The Heat were trying to win three games in a row for the first time since the first week of the season.

Instead, they find themselves one game ahead of the eighth-place Charlotte Bobcats in the Eastern Conference standings, with the Brooklyn Nets not too far behind.

Dwyane Wade will have the next two days to heal before Friday night’s matchup with the Dallas Mavericks.

That game will tip off from American Airlines Arena on Sun Sports at 7:30 PM EST.
[xyz-ihs snippet=”Responsive-Ad”]