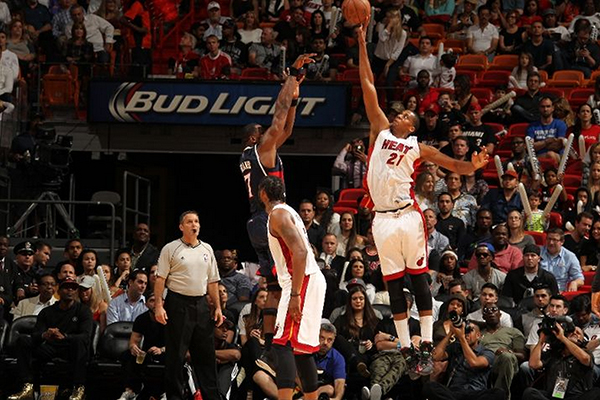 (Miami, FL) – With several key starters given the night off to rest by Head Coach Mike Budenholzer, the Atlanta Hawks (47-12) fended off the Miami Heat (25-33) by a score of 93-91 on Saturday night at American Airlines Arena. With the loss, the Heat fell to a dismal 10-17 record at home this season and did not help their cause in the Eastern Conference playoff race.

Despite being down by as many as 18 points early in the third quarter, the Heat stormed back and continued to chip into the Hawks lead. However, Atlanta refused to let Miami take the lead at any point during the game and thwarted any satisfaction of a Heat comeback victory.

After they trailed 43-33 at the half, the Heat compiled 38 points alone in the fourth quarter as their comeback attempt came up two points short. Two All-Stars, point guard Jeff Teague and center Al Horford, along with small forward DeMarre Carroll did not suit up, but the Hawks kept the Heat at bay en route to their fourth straight victory.

“Just working our way through the season,” said coach Budenholzer, “And trying to keep us in a good place health-wise.”

Hawks point guard Dennis Schroder, who started in place of Teague, contributed a key double-double with 16 points, 10 assists and two steals while All-Star power forward Paul Millsap (eight of 15 from the field) led his team in scoring with 22 points, five rebounds and four assists.

All-Star shooting guard and three-point extraordinaire Kyle Korver, who had a terrible night shooting the basketball by his standards (2-9 from the field for seven points), was a nuisance on defense as he forced four steals.

However, both the Heat and Hawks were extremely careless with the basketball on Saturday night. Miami recorded an embarrassing 23 turnovers, with eight committed by Luol Deng, while Atlanta squandered the ball away 18 times.

Hassan Whiteside, who continues to be a double-double machine over the past two months, was an absolute beast on the glass. He had 14 points, two blocks and a staggering 24 rebounds, 10 of which came in the first quarter alone.

Dwyane Wade led the Heat in scoring as he registered 22 points, four assists, four rebounds and three steals while Mario Chalmers came off the bench to contribute 16 points, five steals and four assists.

An off night by point guard Goran Dragic was clarified by Miami Heat head coach Erik Spoelstra, who said he got popped in the back during the first half. Despite the injury, Dragic was kept in the game and logged 35 minutes.

“(He) probably shouldn’t have played in the second half,” said Spoelstra on Dragic’s injury. “He gutted it out.”

In the loss, Miami was highly effective at the charity stripe as they sank 20 free throws out of the 21 attempted on the evening. The Heat, who are still holding on to the seventh seed in the Eastern Conference by a thread, face a crucial stretch of games coming up.

On Monday night, the Heat will take on the Phoenix Suns (31-29) at American Airlines Arena as Miami will continue to play eight of their next 10 games at home. The contest is slated to tip off shortly after 7:30 pm ET and will be broadcast on NBATV.
[xyz-ihs snippet=”Responsive-ImagenText”]