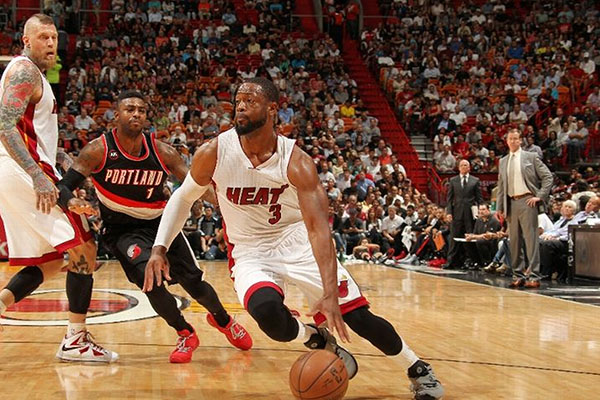 (Miami, FL) — Against one of the top teams in the Western Conference, the Miami Heat (31-36) pulled off yet another impressive home victory at American Airlines Arena on Wednesday night as they edged the Portland Trail Blazers (44-22) by a score of 108-104 in thrilling fashion.

Dwyane Wade took over the game in the fourth quarter as his team rode to another win, which helped their playoff chances in a jump to the seventh seed. If the regular season ended today, the Heat would be matched up against LeBron James and the second-seeded Cleveland Cavaliers (44-26) in the first round of the 2014-2015 NBA playoffs.

“This is the best I have felt for a couple of years,” said the three-time NBA champion and 11-time All-Star.

Wade came up clutch in front of the home crowd in Downtown Miami, as he scored 15 of his 32 points in the final 12 minutes and what turned out to be the game-winning fadeaway jumper with 13.6 seconds remaining.

In his seventh straight game, Wade scored at least 25 points as he continues to light up the scoreboard during the month of March.

“The best offense in the fourth quarter was to get the ball to Dwyane & let him create,” said Heat head coach Erik Spoelstra after the game.

Hassan Whiteside, who had another double-double (12 points and 10 rebounds) to go along with a whopping six blocked shots, was in very high spirits following the victory.

“Dwyane Wade is amazing. Y’all can quote me on that,” praised the standout center Whiteside.

Goran Dragic had a great game of his own, as the point guard scored 20 points, dished out 11 assists and had two steals on the defensive end of the floor. With 24 points and a perfect four of four from downtown, Luol Deng stepped up and shot nine of 13 overall from the field.

The victory was not easy for Miami whatsoever, as they did not have much of an answer on defense for Blazers All-Star power forward LaMarcus Aldridge, who exploded for 34 points (15 of 24 from the floor) and 12 rebounds. The Blazers had Miami down by as many as 11 points in the second and third quarters.

All-Star point guard Damian Lillard had 17 points on the night, while shooting guard Arron Afflalo contributed 15 points of his own. Off the bench, center Chris Kaman had a very good game in only 18 minutes, as he finished the night with nine points and 13 boards.

On Friday night, the Heat will look for their seventh win in 10 games and their third straight victory. Miami has not won three games in a row since they started the season 3-0, but they have a golden opportunity when the Denver Nuggets (26-42) come to town. The contest is scheduled to tip off shortly after 7:30 pm ET at American Airlines Arena.
[xyz-ihs snippet=”Responsive-ImagenText”]