Heat vs. 76ers Game Recap: ‘It Ain’t Going to Get No Worse Than This’ 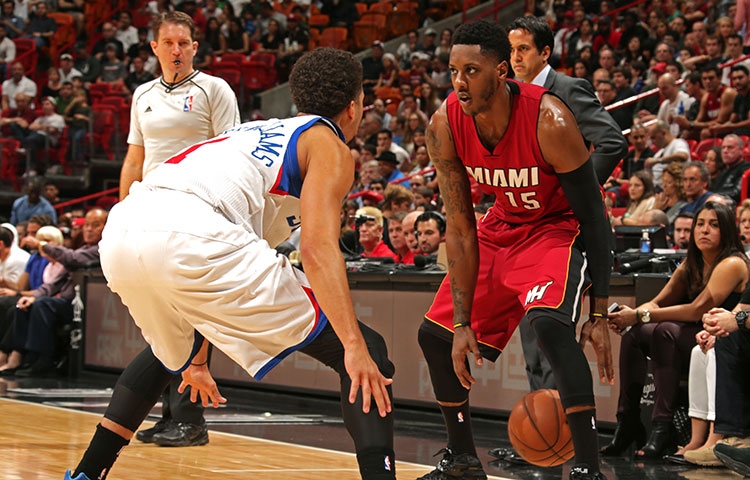 (Miami, FL) — At the end of what might’ve been the Miami Heat‘s worst performance of the season as they fell 91-87 to the Philadelphia 76ers, superstar Dwyane Wade said, “It ain’t going to get no worse than this.”

The 76ers came into American Airlines Arena on Tuesday night with the worst record in the NBA at 3-23, but it seemed it didn’t matter what opponent came into the Heat’s house as Miami mustered just nine points in the fourth quarter after leading at one point by 23.

What used to be a team that forged an identity over the course of four years, looked like a mere shell of themselves as they put up long jumpers at the end of the shot clock, played lazily on defense, and was absolutely careless with the basketball.

The Heat were once again without center Chris Bosh, as he looks to return for Miami’s Christmas Day game against the Cleveland Cavaliers, however, that was no excuse for the lackluster performance put forth on Tuesday night.

“We’re not at a point right now where we’re circling games more than others. We’re in survival mode right now,” head coach Erik Spoelstra said before the game.

Miami had not won consecutive home games in more than a month coming into tonight’s game, and squandered that opportunity when they let the 76ers outscore them 45-18 starting at the midway point of the third quarter where the Heat held a 69-46 lead.

Sophomore Michael Carter-Williams scored 20 points and Luc Mbah a Moute added 19 as Philly won consecutive games for the first time this season at the expense of the Heat.

Not to mention, the 76ers had just eight players suit up in the contest as several players were unavailable due to a variety of illnesses, injuries, and roster moves.

Wade finished the night with 23 points including 17 of those 23 coming in the first half, however, it was the second half that crushed Miami.

When asked after the game if the loss had something to do with the Heat looking ahead in their schedule to the Christmas Day matchup with the Cavs, Wade responded,

The Heat look to redeem themselves in a gargantuan matchup on Christmas Day as LeBron and company come to town in what could be a Christmas Day massacre if Bosh decides not to suit up.