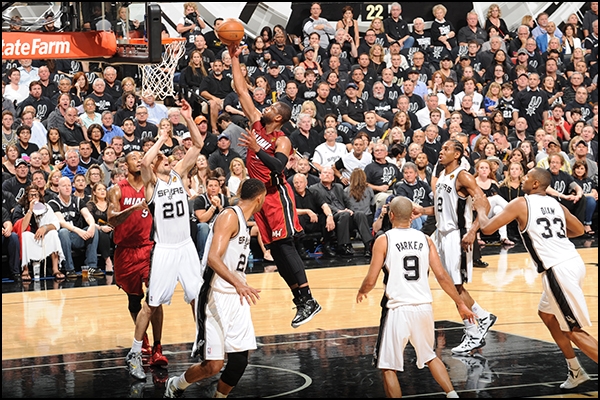 Following the inevitable storm of criticism, LeBron reluctantly admitted the sweatbox that was the AT&T Center undoubtedly had an adverse effect on his ability to stay in the game. “I’ve never played an NBA game like it was last night as far as the heat. Not an excuse but it was an extreme condition.” (Per MiamiHerald.com)

After playing in what might as well have been an oven, a fixed A/C unit and a chance at redemption will pay dividends for Miami’s chances in game 2. After having solid control for most of the third quarter, a stretch of turnovers almost spelled doom for the Spurs. That was until King James’ kryptonite reared its ugly head—muscle cramps. After playing only five minutes in the fourth, LeBron was forced to sit out the rest of the game, and all he could do was watch helplessly from the bench.

Despite a rough fourth quarter, Miami looked as if they were about to cruise to the finish line until San Antonio got hot, and their MVP caliber superstar was forced to retire from the contest. While the media storyline appears to mention nothing but cramps and downplaying Miami’s performance, they fail to realize that Miami was an ill-timed bout of muscle cramps away from snatching game 1.

The media might be overreacting, but Rashard Lewis isn’t. “We played pretty well throughout the game,” said Lewis. “In the fourth quarter we broke down and made a lot of mistakes, but we can’t play better defense. [San Antonio] shot way over 50-percent.” Rashard was spot-on with his assessment, and it’s honestly as simple as that.

LeBron, despite his history of cramping, won’t bow out this game for the same reason. Gamesmanship or not, San Antonio won’t be able to rely on hot air to lock up the early 2-0 series lead; it’s going to take another near-perfect shooting performance and uncharacteristic benching for King James. Although game 1 was a disappointing loss for Heat fans, they can take comfort that they played a solid game up until a disastrous fourth.

Miami will likely throw out their perimeter oriented lineup yet again for game 2. In an interesting move, Heat Head Coach Erik Spoelstra opted to play stretch forwards Rashard Lewis and Chris Bosh in the starting lineup. This coaching decision spaced the floor on Miami’s side of the ball, and it helped counter the Spurs’ heavy frontline by luring them out towards the wings and corners.

If Heat fans remember game 6 of last year’s Finals, a similar strategy was employed down the stretch when Coach Spo sat Dwyane Wade out in some of the waning minutes that prevented San Antonio from packing the paint as much as they liked. Of course, the lineup is much different than last year’s Heat team, but the philosophy is similar, and it’s a philosophy that has appeared to make the Spurs crack just a bit, but clearly, not enough to seal the deal.

San Antonio just flatout hit tough shots in game 1, and Miami had trouble matching their output when it mattered most, conceding a 31-9 run late in the game. It wasn’t so much the totality of the San Antonio offense as much as it was the timing. Miami’s defensive rotations need to be swifter for game 2, and they need to turn spot-up shooters like Danny Green into non-factors by making them put the ball on the hardwood. Aside from San Antonio’s perimeter shooting, the Spurs fed their big men. Tiago Splitter and Tim Duncan combined for 35 points on 14-16 shooting, and while Miami wanted their big guys to knock down shots from afar, the Spurs were content tossing dropping passes into the paint and converting easy opportunities.

The margin of error for either team at this juncture is very, very slim. Box scores won’t divulge much, but they do illuminate the areas where each team is trying to make their mark. As far as turnovers go, Miami turned an efficient Spurs team over 22 times— winning the turnover margin by six.

Miami turned a lot of those turnovers into easy points on the other end, and if Miami can do just that yet again, it will be exactly what they need in order to rebound for Game 2, but they can’t get it done without their superstar.

Cramps aside, LeBron looked great. He was alert and aggressive, and he established his presence for most of the contest. He finished with 25 points, six boards and a trifecta of assists in what was an encouraging yet disappointing finish. Yes, the cramps were troublesome, but it’s a good sign that he’s found some rhythm early in the series.

Mario Chalmers was troubled by foul issues in the onset of the game, and he never really found much of a rhythm in the contest. Expect more of Norris Cole for Game 2 as Spo will likely want to spice things up a bit with his toughness and ability to get hot from beyond the arc.

Dwyane Wade played pretty well, and although it wasn’t a particularly remarkable performance, he was definitely aggressive from the early going. LeBron needs Dwyane to carry some of the load yet again in game 2, but ultimately, Miami lives and dies by the greatness of LeBron, and he understands the importance of ensuring he finishes strong this time around.

“I’m going to try to do the same thing in game 2. Obviously, I don’t want to go too far with running my tank out; I want to be able to finish the game, but you gotta have that mindset [where] there’s no tomorrow.” (Courtesy of CBS Sports)

He needs to come out guns blazing yet again for game 2, and if Miami can steal the crucial second home game from San Antonio, they can rely on some home cooking of their own to turn the series in their favor.

In last year’s Finals, Miami dropped the first game of the series, albeit at home, and they went on to bounce back with a 103-84 win over the Spurs in Game 2. There’s no doubt the Heat hope history repeats itself. Hopefully for their sake, a huge game 2 win will pave the way for yet another ring.