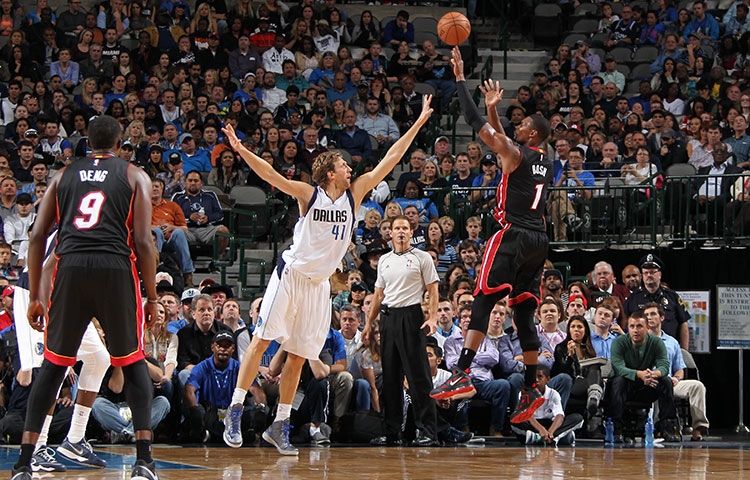 Sunday night’s game between the Miami Heat and Dallas Mavericks represented a battle between two familiar foes. The only problem was, it wasn’t much of a contest. Midway through the fourth quarter, the Heat led by as many as 22 points following a Dwyane Wade layup that pushed the Heat’s lead to 94-72.

Luol Deng led the Heat with 30 points on 13-of-19 from the field with five rebounds and four assists. Miami had three other players score at least 18 points, as Wade, Chris Bosh and Mario Chalmers all posted at least 18 points in the victory over Dallas. It was Deng’s fourth career 30-point game.

The Mavericks were led by Monta Ellis’ 23 points, while Dirk Nowitzki struggled to score 17 points on just 6-of-15 shooting. Despite entering the game with the second-best offense in the NBA, Dallas was held to just 42 percent shooting versus Miami. Dallas’ Tyson Chandler scored 16 points with 15 rebounds.

The Heat’s victory over Dallas marked their seventh straight victory over the franchise since losing Game 6 of the 2011 NBA Finals.

Though the Heat continued to allow offensive rebounds and second-chance points– Chandler grabbed 10 offensive boards–the team shut down the Mavs’ high-powered offense for most of the night. Dallas was held to 31 percent from three-point range, while the Mavs’ $46 million man, Chandler Parsons, struggled for the second consecutive game. He was held to 1-of-9 shooting and didn’t score his first field goal until there were a little over two minutes remaining in the contest.

While Miami’s defense did shut down the Mavs, it was the ball movement on offense that led to four Heat players alone combining for 88 points. The team assisted on 19 of their 24 field goals made in the first half, before finishing the game with 31 assists on 42 field goals converted.

Wade led the game in assists with 10 as he played a season-high 37 minutes in the win. Despite being held out of back-to-back games on a regular basis last season, ‘Flash’ has played in all three back-to-back sets so far this season. Sunday’s game versus the Mavs marked Wade’s third straight game with at least 20 points scored.

The veteran shooting guard had the following to say in regards to the team’s victory over Dallas:

“Our best win of the year so far. It was challenging. We came out victorious and did what we wanted to do which is play better as a team. But this was our toughest task of this span (seven games) and we played our best basketball.”

On the topic of Deng having the best performance of his Heat career thus far, Wade stressed the importance of ball movement:

“I think certain nights we have to do a good job of getting him the ball just with great ball movement. Tonight, he was the beneficiary of them double-teaming guys off of the ball and he made the shots. He had a big night for us and we’re gonna need that.”

Similar to the previous night’s game, the Heat had trouble finishing off their opponent as the Mavericks made a late run toward the end of the fourth quarter. After taking a 94-72 lead, Miami allowed the Mavs to go on a 21-9 run to cut the deficit to 103-93. However, it was too little, too late, as Dallas didn’t cut into a single-digit deficit until there were 35 seconds remaining in the game.

Deng commented on the Heat’s struggles in closing out their opponents:

“We’re really trying to focus on 48 minutes a game. We’ve done a good job so far on getting the lead. We’re getting better defensively. Offensively we’re moving the ball. We just really have to focus when we get the lead, we’ve gotta put the game away.”

Danny Granger (hamstring) continued to sit out due to injury, while Chris Andersen sat out his fifth consecutive game due to his rib injury. Ira Winderman of The Sun Sentinel insinuated that Granger would make his season debut versus his former team, the Indiana Pacers, on Wednesday night.

Speaking of which, the Heat will host the Pacers in an Eastern Conference Finals rematch in their next game on Wednesday at 7:30 EST on Sun Sports and ESPN.
[xyz-ihs snippet=”Responsive-ImagenText”]