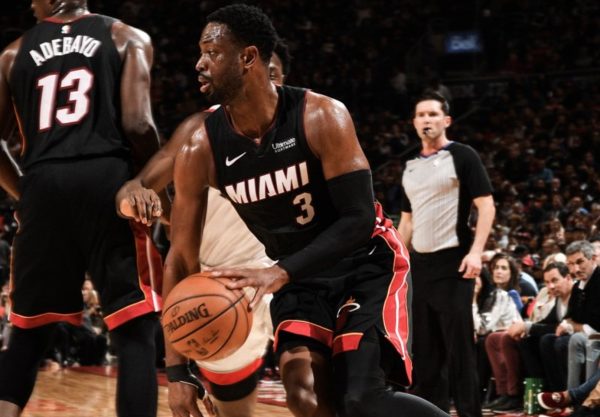 (Toronto, ON) — An ominous start during the first five minutes of the second half doomed a furious Miami Heat comeback attempt as they dropped a 125-115 decision to the Toronto Raptors at Scotiabank Arena on Sunday night.

The defeat results in a split for the Heat’s brief two-game road swing that began Friday night in Chicago.

The Heat trailed 63-54 at the half, but then were on the receiving end of a 25-8 run that made their deficit a 26-point margin at 88-62 with 7:12 left in the third quarter. Over the remaining time during that period, Miami made a huge charge back and managed to head into the final 12 minutes having chopped the margin down to 12 at 101-89.

Despite getting the margin down to eight points on multiple occasions, the Heat couldn’t sustain their rally and fell for the 12th time this season. Toronto had entered the game with the best record in the NBA at 16-4, while the Heat had been struggling with a 7-11 mark prior to Sunday’s clash.

Veteran Dwyane Wade came up with 35 points in a reserve capacity, establishing a new team record for points coming off the bench. The 36-year-old also contributed six assists and five rebounds and continued to show no signs that this is his 16th and final NBA season.

?MILESTONE ALERT? @DwyaneWade has now scored the most points for a player off the bench in Miami HEAT history!

“I was just trying to be aggressive,” Wade said of his record-setting output. “I could tell we needed it a little bit from an offensive standpoint, especially when their team was scoring at a high rate early on. Instead of letting the game go, I decided to be a little aggressive.”

Asked about Wade’s performance after the game, Heat head coach Erik Spoelstra indicated that Wade has been putting in the necessary work to deliver this sort of game.

“Probably realistically, I wouldn’t say he was trending toward this,” Spoelstra said. “But before he took his leave, he was really starting to get his legs under him, and he spent some time, extra time, this week really working on his conditioning and some player development, just trying to get back into rhythm and it culminated tonight. It’s a shame that that kind of game was wasted on a loss.”

Four other Heat players also scored in double-figures led by Josh Richardson, whose 19 points and five rebounds were marred by his 6-for-19 shooting from the field. However, another bench player, second-year man Bam Adebayo, had a huge game with a double-double performance of 16 points and 21 rebounds. Rounding out this group were Kelly Olynyk with 11 points and Wayne Ellington with 10 on the evening.

“He’s doing it on both ends, Spoelstra said of Adebayo’s dominating effort. “You just feel his energy. He asked to come out a couple time times tonight. We couldn’t afford to take him out, he was making too many things happen. That’s what you want to do as a player, but that force is definitely something we can build on.”

Adebayo spoke about how a concerted effort toward more aggression was the fuel for his big game:

During the first half, the Heat’s starting front line was completely dominated on the front line by their counterparts on the Raptors. The trio of center Hassan Whiteside with forwards Rodney McGruder and James Johnson accounted for just six points and five rebounds.

“A lot of mistakes cost us this game,” Adebayo said. “But I feel like my team, we’re always going to bounce back and come in with a positive effect the next game.”

The Heat return home for a Tuesday night clash at American Airlines Arena against the Atlanta Hawks. That game will tip off just after 7:30 p.m.
[xyz-ihs snippet=”HN-300×250-TextnImage”]