Don't Miss
Home / Editorials / Will The Miami Heat Be Title Contenders Next Season?

Will The Miami Heat Be Title Contenders Next Season? 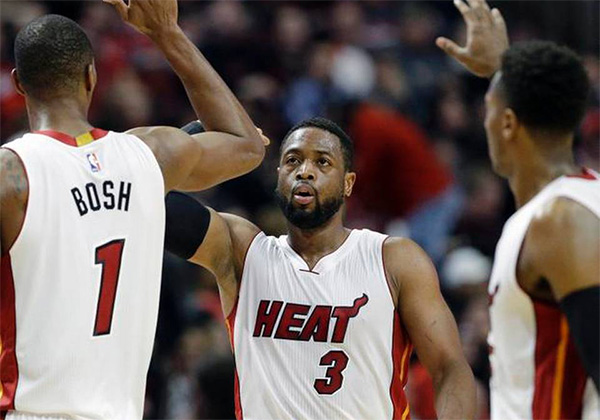 As we enter the month of June, optimism is at its peak with the Miami Heat.

After a season that culminated in a 37-45 record and a non-playoff year, it was made official with the NBA Draft lottery on Tuesday night that the Heat would hold the No. 10 pick in the 2015 NBA Draft.

Despite achieving a losing record, Miami enters the 2015-16 season in better shape than most teams with similar records. Dwyane Wade and Chris Bosh are pretty much locks to return for their sixth season together as a duo. Hassan Whiteside, who was perhaps the league’s biggest surprise of last season will continue to hold down the center position for the Heat.

While it’s still a question mark as to whether Goran Dragic and Luol Deng will return for Miami next season, it remains clear that the Heat will have a starting lineup that can match up with the best teams in the Eastern Conference. The question is, will Miami be injury-free and will they have enough depth to outlast the aforementioned teams?

The bottom line is this—the Heat were decimated by nonstop injuries last season and their bench was one of the worst in the league. The team ranked in the bottom five in bench scoring in the entire NBA.

Many have assumed that had the Heat been healthy for the duration of the 2014-15 season that they would have been one of the Eastern Conference’s elite.

There is little doubt that injuries hampered the team, but would Miami really have been at the top of the pecking order with teams like the Cleveland Cavaliers, Atlanta Hawks and Chicago Bulls?

All three of the aforementioned teams are stacked. Depth-wise, the Cavaliers are probably the worst of the three, but they have the best player in the world in LeBron James and two All-Star players in Kyrie Irving and Kevin Love. Not to mention that they’ve revamped their roster at the trade deadline by acquiring key pieces such as Iman Shumpert, J.R. Smith and Timofey Mozgov.

In the 28 games played together during the 2014-15 season, Bosh and Wade led the Heat to a 13-15 record. While it is a relatively small sample size, it’s sizable enough to demonstrate how lacking the Heat were as a team during the 2015 season even when their two main stars were healthy and on the court.

Of the four teams currently in the conference finals, two of those franchises (Golden State Warriors and Hawks) are a couple of the deepest teams in the NBA. They rely on team ball and major contributions from every guy in the rotation. The other two squads (Cavs and Houston Rockets) rely heavily upon isolation and the offensive dominance of their core superstars in LeBron and James Harden.

While Wade had a resurgent season this past year and ranked second in the league in usage percentage, he is nowhere near as effective as a No. 1 option as James and Harden currently are. Harden ranked fourth in the league in player efficiency rating, while James ranked sixth in that category. Wade was 20th in the NBA in PER.

Therefore, he cannot be depended upon to carry an offense the way those two fellow perimeter players do for their respective teams.

As far as being a depth-heavy team, Miami has their work cut out for them. The franchise is expected to retain Dragic by offering him a max-level contract. When you factor in the contracts of Wade and Bosh, plus the player option that Deng holds for next season, the Heat will be very limited in players that they can add to their bench.

They will have to hope guys like Mario Chalmers, Josh McRoberts and whoever is drafted with the No. 10 pick can carry the bench workload. Even in a best-case scenario the Heat don’t stand a chance of matching teams like the Warriors and Hawks in terms of being a complete team.

So the question remains, is Miami truly going to be a contender next season merely because they will likely be healthier than they were this past season?

The short answer to that question is no. Many have come to this supposed conclusion that the Heat would automatically qualify as title contenders considering they were just a season removed from playing in the NBA Finals. Losing James makes a huge difference for an NBA squad. Just ask the Cavaliers, who were among the worst teams in the league following LeBron’s departure from 2010 through 2014.

While the Heat’s projected starting lineup for next season looks great on paper, the actual product on the court has a long way to go before the franchise can be considered a true title contender again.
[xyz-ihs snippet=”Responsive-Ad”]