Don't Miss
Home / Editorials / Will the Cavs and Heat be a Top Rivalry for Years to Come?

Will the Cavs and Heat be a Top Rivalry for Years to Come? 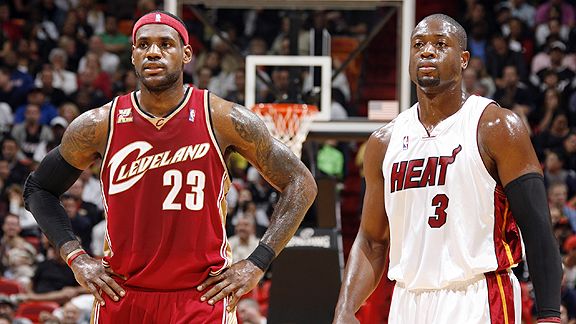 Since LeBron James announced through a piece featured in Sports Illustrated that he was taking his talents back to his hometown, the Cleveland Cavaliers have had one of the most impactful off-seasons in franchise history. While the Miami Heat are the defending Eastern Conference Champions entering the 2014-15 season, the Cavaliers — not the Heat — are considered the favorites to represent the East in the NBA Finals next season.

The opinions regarding the Heat’s future aren’t as positive. While Miami is still regarded as a playoff lock for the upcoming season, many have the Heat slotted as low as a No. 7 seed despite both Dwyane Wade and Chris Bosh returning to defend the Heat’s four-year reign as Eastern Conference champions. In ESPN’s forecast of the Eastern Conference standings for the upcoming season, the Heat are rated as the sixth-best team in the East, with a regular season prediction of a 44-38 record. To make matters worse, the Charlotte Hornets —  a team the Heat eliminated in the first round in last year’s playoffs — are pegged as the fifth-best team in the East for 2015.

While some have predicted doom for Miami, others have had more reasonable projections. Ty Schalter of Bleacher Report thinks the Heat will finish as the No. 3 seed in spite of losing LeBron, while the new-look Cavaliers are projected to be the East’s No. 1 seed.

Although the general consensus is that the Cavs are the East’s best team (while opinions regarding the Heat vary depending on who you ask), there is little doubt pertaining to the excitement surrounding the Heat and Cavaliers’ matchups with one another this season. When the NBA announced its schedule earlier this month, it was determined that the LeBron-led Cavaliers would visit Miami on Christmas Day in James’ first visit to South Beach since bolting from the team this offseason. This game will be considered the NBA’s marquee matchup during the regular season.

Over the years, the NBA has seen a handful of great rivalries — many of which involved the Heat. Miami has had epic battles with the Boston Celtics, Indiana Pacers and San Antonio Spurs over the past four years alone while the ‘Big Three’ were together. After the Celtics dismantled their core from 2012 to 2013 with the departures of Ray Allen, Paul Pierce and Kevin Garnett, Boston’s rivalry with Miami ended. Indiana’s three-year run of facing the Heat in the postseason looks to come to an end this upcoming season as star forward Paul George is likely to miss the season due to injury, while Lance Stephenson departed through free agency for Charlotte. As far as the Spurs are concerned, the only chance the Heat have of maintaining that rivalry is if they make it back to the NBA Finals for a fifth consecutive season.
[xyz-ihs snippet=”Responsive-ImagenText”]

The Cavaliers not only added the NBA’s best player in the offseason, they completely beefed up their roster. The team from Ohio solidified their rotation with the signings of former Heat swingmen Mike Miller, James Jones and Shawn Marion. Now that the trade is official, the Cavs have added Minnesota Timberwolves star forward Kevin Love by trading away the No. 1 overall pick in the 2014 NBA Draft, Andrew Wiggins.

No wonder Vegas has Cleveland chalked as the NBA Finals favorites next season.

And while some in the media may be down on the Heat, the fact still remains that Wade and Bosh will be returning in 2014 to lead the squad. Some may have forgotten, but No. 3 is a former NBA Finals MVP who has led the Heat to a championship in the past, while Bosh was the franchise centerpiece for the Toronto Raptors for seven seasons before signing with Miami in the summer of 2010. To make matters more intriguing, Pat Riley compensated for the loss of LeBron as best anyone could by adding Luol Deng, Danny Granger and Josh McRoberts to an already deep core.

As far as Eastern Conference contenders are concerned, pundits are high on the Chicago Bulls. The Bulls added Pau Gasol, and return key pieces such as Derrick Rose and Jimmy Butler. However, this is with the assumption that Rose will be healthy and will return to the form that made him the NBA’s MVP during the 2010-2011 season. In fact, that was the last time Rose was healthy for a full season and actually played at an elite level. Considering Rose is sitting out Team USA’s exhibition games due to lingering knee issues, does one really want to bet that the former NBA MVP will play like one in leading the Bulls this season?

The Heat and Cavaliers will play each other four times this season, with February 11, March 16, and April 2 scheduled as the other dates in which the two East powerhouses will collide. Now that the Cavs are entrenched as an elite team in the NBA due to the signing of LeBron and the Heat facing a cloud of uncertainty with the defection of the four-time MVP, you will be hard pressed to find a better storyline than the one that revolves around the impending rivalry surrounding the Heat and Cavs.

With the NBA lacking in true rivalries in the modern era, and teams such as the Celtics and Pacers fading into obscurity, Cavs-Heat will become the league’s top rivalry this season.
[xyz-ihs snippet=”Responsive-ImagenText”]