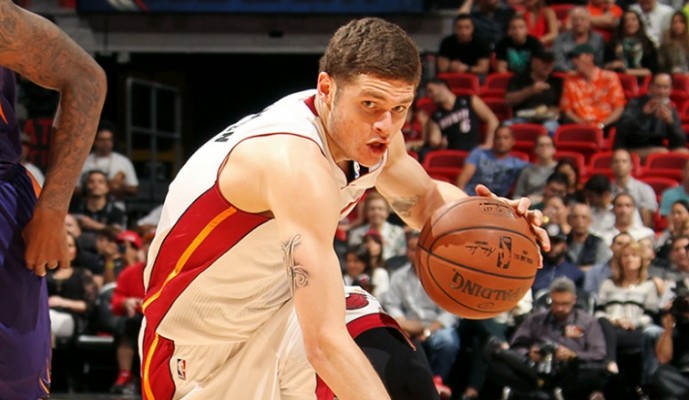 There are big expectations for the Miami Heat as they enter the 2015-16 season.

Big-name players either have been added or retained this offseason by the Heat. The biggest names to have been retained by Miami are none other than Dwyane Wade and Goran Dragic. While there is little doubt that these two players will be most instrumental to the organization’s success this season, there is one specific player who is poised to be Miami’s breakthrough player of the year: Tyler Johnson.

For those that don’t know his backstory, Johnson was an undrafted free agent out of Fresno State University. The 6’4″ guard signed with the Heat after going undrafted in the 2014 NBA Draft. In 10 summer league games during his rookie season, Johnson averaged 12.5 points, 3.0 rebounds and 1.5 assists per game while shooting 55 percent from the field.

His impressive performance over the summer landed him a contract and an invitation to training camp from the Heat. Although he only saw action in one preseason game, he was brought back to the organization’s D-League affiliate after clearing waivers.

While playing for the Sioux Falls Skyforce from November until January, Johnson showed off his scoring ability by averaging 18.5 points on 49 percent from the field and 42.6 percent from beyond the arc.

His penchant to score eventually led to Johnson being called up to the Heat’s main roster in January, where he would end up as a key piece in the rotation for the remainder of the season.

When you take a look at his season averages for the 2014-15 campaign, they’re hardly impressive by any means—he averaged just 5.9 points, 1.3 assists and 2.5 rebounds per game in 32 appearances. His shooting percentage dipped drastically from the summer and D-League, as he converted on just 41.9 percent of his field goal attempts.

However, considering the many issues the Heat faced in regards to injuries and chemistry, combined with the fact that Johnson was an undrafted rookie pressed into major minutes sooner than expected, it is impressive how the Fresno State product performed at various points throughout the season.

Take for instance, Johnson’s 26-point performance in a 115-98 victory over the Phoenix Suns on March 2nd. The rookie didn’t even take the court until midway through the first quarter, and played just 26 minutes overall in the victory. However, he converted on 10-of-13 field goal attempts, including a perfect 3-for-3 from beyond the arc.

Just five days later in a comeback 114-109 victory over the Sacramento Kings, Johnson scored 24 points, grabbed six rebounds and dished six assists while shooting 58 percent from the field. In a huge vote of confidence from Head Coach Erik Spoelstra, Johnson saw 44 minutes of action in the overtime victory.

Before the end of the season, Spoelstra had nothing but positive things to say about his promising young guard:

“He’s earned everything that he’s gotten up to this point. He’s very tough, very competitive. He’ll be the last one in the gym today. These are the qualities that you like and he’s showing improvement as a combo guard. We think he’s a promising young guard prospect that we can develop.”

The 23-year-old stressed that although last season was a great experience for him, he is intent on improving in his second season:

“I think it was the best year of my life because I got to experience what it’s like to play basketball at the highest level. But at the end of the day I’m not really satisfied with just being here. I want to stay here and stay in the league for a long time and make this a career.”

While the young guard may have a future ahead of him as a key piece in the rotation for the Heat, what exactly is the reason why he should be the team’s breakthrough player in 2015-16?

The organization recently traded guards Shabazz Napier and Zoran Dragic. While Dragic is more of a wing player than a point guard, Napier was considered the team’s franchise point guard as recently as a few months ago.

Even with the re-signing of Goran Dragic, Napier would have been set up as the team’s primary backup at the point. With him out of the equation, and Mario Chalmers being shopped around on the trade block, it illustrates just how much confidence the Heat have in Johnson playing major minutes for a team expected to be a championship contender.

The undrafted free agent excels as a sparkplug. He provides immediate energy off the bench, capable of scoring outbursts that can change the tide of a game. He is not only adept at scoring in spurts, but he possesses the ability to shoot the long ball well. Last season he was the Heat’s most efficient three-point shooter as he knocked down 37.5 percent of his attempts.

Though Miami did bring in free agent Gerald Green as a three-point specialist, it will be Johnson who will be depended upon to provide the Heat with efficient shooting from beyond the arc. In the 2014-15 season, Miami was one of the worst teams in the league at long-range shots, ranking 24th at 33.5 percent.

While Johnson only averaged 18.8 minutes in his 32 appearances last season, he will receive a major boost in minutes. He will be the team’s top backup at point, and arguably the team’s primary option off the bench as a guard. His ability as a combo guard will pay huge dividends for not only Johnson, but the team itself.

While the Fresno State product still needs to improve his dribble and consistency on shots—he converted on just 32.5 percent of field goal attempts in the month of April—he enters the upcoming season with the most to gain of any of the players on the current roster.

The young guard believes he knows what it takes to take that next step, as he stated at the conclusion of the 2014-15 season:

“I have the ability to take these experiences that I went through this year, as weird as some of them were, and apply them to my game as opposed to just getting into the best shape and still doing college workouts, I can understand specifically what I can do to make the jump for next year.”

Johnson will have every opportunity to “apply” those experiences to his skill set as he continues to grow in the Heat organization.
[xyz-ihs snippet=”Responsive-Ad”]