Why the Miami Heat Should Draft Croatian Sharpshooter Mario Hezonja 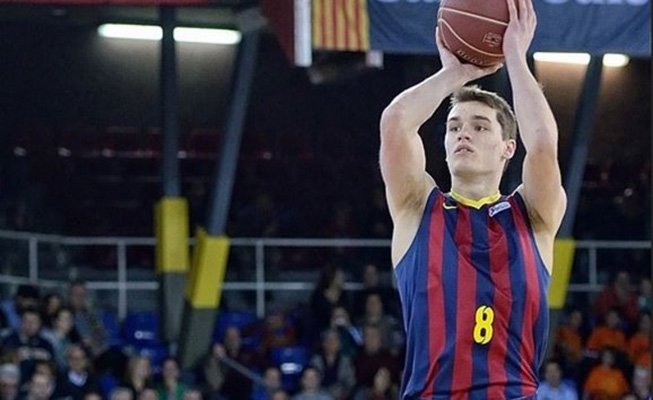 While all signs are pointing to the Miami Heat reinforcing its frontcourt at the 2015 NBA draft on June 25, talented FC Barcelona sharpshooter Mario Hezonja might be the best pick to help the three-time champions become title contenders next season.

A 6-foot-8 shooting guard who can also play small forward, Hezonja is a long-range specialist that can stretch the floor. And, unlike most rookies, playing professional hoops in Europe is preparing him to contribute from day one.

The 20-year-old is coming off the bench this season for a strong Barcelona squad that starts Juan Carlos Navarro and Alex Abrines. However, even with limited playing time Hezonja has put together some magical moments.

Stellar three-point shooting played a key role in the recent success of the Heat. Miami finished 11th in the league from behind the arc during its 2012 title run, and shot an astounding 39 percent the following year to rank second. But this past season the Heat ranked a forgettable 24th out of 30 teams.

With the expected return of free agent playmaker Goran Dragic and double-double machine Chris Bosh, the Heat desperately need a perimeter threat to help unclog the paint. Having Hezonja camping out in the corner will make it easier for both Dragic and Dwyane Wade to showcase their penetrating skills.

FC Barcelona is utilizing the Croatian national as a complementary weapon, which could be similar to the sixth man role he might play during his NBA rookie season. A pure shooter with a fluid stroke – who also possesses good athleticism and a fondness for attacking – Hezonja has a high ceiling with the potential to develop into one of the league’s best three-point marksman.

Although Miami does need to address its lack of frontcourt depth this offseason, drafting a defensive-minded big man over a sweet-shooting sniper with fantastic upside is not a prudent move. Numerous free agents will hit the open market this summer that could provide the much-needed depth behind Bosh and Hassan Whiteside.

The window for D-Wade collecting his fourth ring is closing fast and Hezonja is one of the few rookies who can make a quick impact. But will the Heat play it safe with its top-10 pick and reach for a big man, or will Pat Riley pull the trigger on the best sharpshooter in the draft?

chris boshdwyane wadeFeaturedGoran DragicMario Hezonjamiami heatNews Tickerpat riley
← Previous Story Miami Heat: How Will The 2015-16 Roster Look Next Season?
Next Story → 5 Reasons Why The Playoffs Aren’t The Same Without The Miami Heat