Why the Miami Heat Are Now Top Dogs in the East 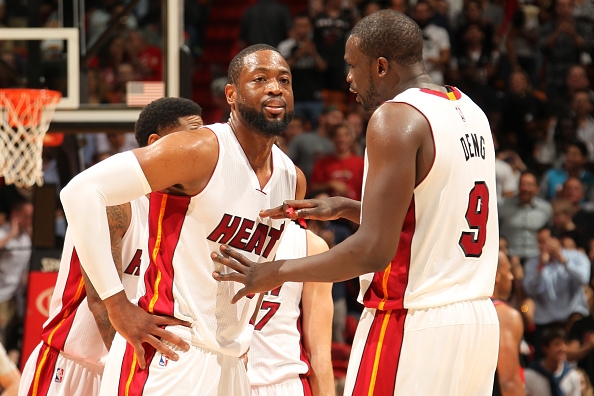 The Miami Heat have had one heck of an offseason.

It started with the surprise selection of Duke University’s Justise Winslow with the No. 10 overall pick in the 2015 NBA Draft. It continued with the opt-in and re-signings of key players such as Luol Deng, Dwyane Wade and Goran Dragic. More recently, Pat Riley has pulled off two absolute steals in signing veteran free agents Amar’e Stoudemire and Gerald Green to minimum contracts worth roughly $1.5 million for each player.

Not bad for a team that went 37-45 last season and missed the playoffs.

“The expectation for us is I just want to keep the team and hope the team can stay healthy. I believe they will. I think all the players are coming back highly motivated. And I think with a complete roster that we can contend in the East, and that’s where it all starts — and I mean contend high. That’s the way it’s been the last 20 years. We’re gonna go for it. I don’t think we’ll ever be a team that does three, four, five years of rebuilding.”

It’s not just the team president that recognizes the Heat as a threat in the Eastern Conference next season—it’s also former Heat player and four-time MVP LeBron James of the Cleveland Cavaliers:

“I think Miami is doing some great things. They’ve added some big pieces. They signed Amare (Stoudemire), I saw that…and the re-signing of (Goran) Dragic and C-B (Chris Bosh) coming back, one of my good friends, he’s coming back off of injury, and by getting D-Wade (Dwyane Wade) back, they’re going to be a contender.”

For those that were sleeping last year, the Cavaliers were the top dogs in the Eastern Conference. Despite finishing second in the regular season standings to the Atlanta Hawks, they swept the Hawks 4-0 in the Eastern Conference Finals. Had it not been for season-ending injuries to key players Kevin Love and Kyrie Irving during their playoff run, one could argue they would have defeated the Golden State Warriors in the NBA Finals.

Thus far this offseason, the Cavaliers have brought back their entire supporting cast with the exception of Tristan Thompson, J.R. Smith, and Matthew Dellavedova.

All in all, both clubs have had the best offseasons of any team in the Eastern Conference.

After recognizing the Heat as a contender during his Bleacher Report Radio interview, James noted how some teams in the league have gotten weaker:

“The landscape continues to change every year. You see that. So many teams can be there. So many teams got better. Some teams that were good last year will probably fall off because they lost some integral pieces of their team. But you see every year, teams come, teams go.”

It’s hard to argue with LeBron on that point. Top teams in the Eastern Conference such as the Atlanta Hawks, Toronto Raptors and Washington Wizards all regressed this offseason when they lost key players from their teams. The Hawks lost DeMarre Carroll, the Raptors’ Lou Williams left for the Los Angeles Lakers while the Wizards’ Paul Pierce went out West to play for the Los Angeles Clippers.

The East is always a guessing game every season, which leaves plenty of room for teams like the Heat to get back into the elite fold.

Related: 5 Players Most Likely to Be Traded This Offseason

While some of those bench players could be traded before the season starts, it still doesn’t take away from the fact that the Heat will enter the 2015-16 season with six-time All-Star Stoudemire, three-point shooting specialist Green and NCAA National Champion Winslow coming off the bench.

The East’s other big contender, the Chicago Bulls, has remained mostly quiet during the offseason. The Bulls introduced a new head coach while re-signing Aaron Brooks, Jimmy Butler and Mike Dunleavy.

While that will keep the Bulls as one of the three teams to beat in the East, it won’t make them any more of a threat to beat Cleveland than they were this past season. Chicago lost in the Eastern Conference semifinals to the Cavaliers in spite of Love being out and Irving hobbled due to injury.

Barring unexpected leaps in improvement from franchise player Butler and young pieces such as Nikola Mirotic, it’s hard to imagine the Bulls having more success than they had last season.

Even the Heat’s own players can’t contain their excitement for next season. Bosh commented on the Heat’s title chances while appearing on SiriusXM’s Bleacher Report Radio on Sunday, via Ethan Skolnick:

Chris Bosh on the Heat: “Well, I mean, I like our chances. I think we’re gonna have a good team…. We have everything.” @BR_Radio

Of course, injuries can always get in the way of success. Just ask the 2014-15 Heat who looked to rebound rather nicely from the James departure by adding Deng, McRoberts and Shabazz Napier during last summer’s offseason. Deng would end up not having the impact many had hoped for, McRoberts played in just 17 games due to injury, while Napier failed to stay on the active roster for the entire season.

While anything can happen, it’s hard not to get excited for next season if you’re a Heat fan. This team is just a year removed from an NBA Finals appearance and has reloaded in the best way possible.

The Heat are truly back as contenders and they will be the biggest threat to the Cavaliers’ supremacy in the Eastern Conference for next season and beyond.
[xyz-ihs snippet=”Responsive-Ad”]