Don't Miss
Home / Editorials / Why the Heat Will Be Above .500 By New Year’s Day 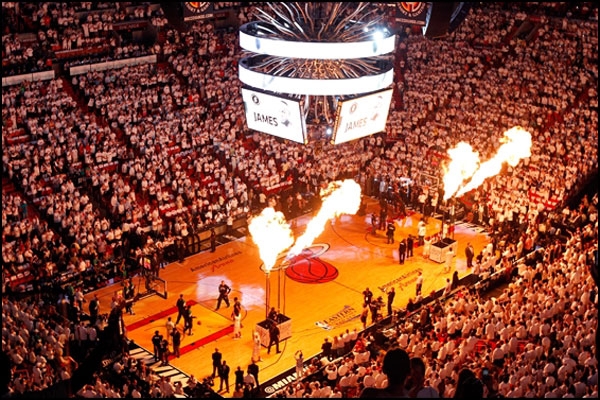 Miami Heat president Pat Riley made some shrewd personnel moves over the summer in the wake of LeBron James’ “Decision: Part II.” By managing to keep Dwyane Wade and Chris Bosh in the fold and adding complementary pieces through free agency and the draft – including Luol Deng, Josh McRoberts and Shabazz Napier – it appeared Riles had the Heat poised to be a dark-horse challenger to the presumptive Eastern Conference favorite Cleveland Cavaliers and Chicago Bulls. And through the first few games of the season, when the Heat went 3-1 led by a resurgent Bosh, Heat fans may have been forgiven for wondering aloud “LeBron who?”

Fast forward six weeks: the Heat are a game below .500, Wade’s health remains a lingering issue, Bosh has come back down to earth, and the new additions are contributing about as much as one could realistically expect. Now Heat fans may be forgiven if their early-season optimism has given way to grudging acceptance of an average team.

But wait…there may be good news on the horizon. After the Heat return from their current five-game road trip, they will play eight of their final ten games of 2014 at American Airlines Arena. They will venture out of South Beach only twice the rest of the year, to play the Brooklyn Nets and Indiana Pacers, both of which are winnable contests. The Indiana game will be played on New Year’s Eve, and their matchup with the Nets will be squeezed in at the beginning of an eight-game home stand. Although the Heat will have no more than one day of rest between games through the end of the year, they have only one back-to-back set remaining (at Brooklyn on December 16 and at home against the Utah Jazz the next night).

Six of their final ten games will be played against teams with losing records, and all but two will be against Eastern Conference foes. So, Coach Erik Spoelstra could give his star shooting guard a bit of extra rest, or sit him altogether, when teams like the Philadelphia 76ers and Orlando Magic come to town. After all, Spoesltra is going to need “Flash” at his best when the Heat play the always tough Bulls, the steadily improving Washington Wizards and the grit-and-grind Memphis Grizzlies.

…Oh yeah, and Cleveland. Miami will say hello to LeBron’s new team that used to be his old team on Christmas Day. It’s unclear whether there will be a gift exchange at midcourt before tipoff.

At any rate, if the Heat win the games they ought to win – against the teams with the same current record as them or worse – that should give them another six W’s. Even if they lose their remaining games against teams with better records, they’ll still ring in the New Year at 17-16. If they manage to steal a game against, say, the Grizzlies or Wizards at home, then the Heat could have close to 20 wins as 2014 comes to a close. Knowing the Heat as we do, however, they’ll probably win or lose a couple of games they shouldn’t (like the recent road win against the Phoenix Suns followed up by a loss at Denver), so a 17-16 record is probably the most realistic goal for the rest of the calendar year.

That translates to a .515 winning percentage, and spread out over an 82-game schedule, a final record of 42-40 – good enough to make the playoffs in the East last season. Sure, it would probably be as a seven or eight seed, but don’t forget, everyone starts the playoffs at 0-0.

Maybe we’re jumping ahead a little here, but the bottom line is this: December’s remaining schedule offers the Heat a chance to move up in the Eastern Conference standings and finish 2014 out in style.
[xyz-ihs snippet=”Responsive-Ad”]