Why the Heat Should Not Trade Chris Andersen and Mario Chalmers 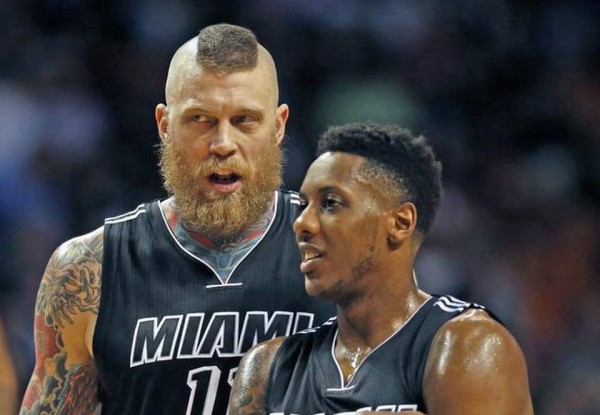 Chris Andersen and Mario Chalmers have been popular names in the trade market over recent months.

While that has been the case, Ethan Skolnick of The Miami Herald believes the Miami Heat should keep both veterans if they truly want to commit to being a contender in 2015-16:

“Now, after the start of this season, I’m more convinced that the Heat, if truly committed to contend, needs to keep as many of these useful players as possible. I’m more convinced as it’s become clearer that Miami, without a current in-prime superstar, only has a shot to compete with the teams who employ one or two of those if it can overwhelm opponents with a great quantity of decent quality.”

The Heat are over the luxury tax line and Andersen is due $5 million, while Chalmers is due $4.3 million for the coming season. Reasons cited by media members for possibly trading the two veterans are the luxury tax penalties and the fact that the Heat already have young and veteran players at both positions.

While it is true that Miami does have depth at guard with Tyler Johnson and Josh Richardson, and at the center/power forward spots with Udonis Haslem, Josh McRoberts and Amar’e Stoudemire, the team is very fragile when it pertains to its depth. Johnson and Richardson are young, mostly unproven players, while McRoberts and Stoudemire have dealt with major injuries over recent years. Haslem remains best used in a limited role at 35 years old.

Skolnick states the following for why the Heat should hold on to Chalmers:

“While he lacks Johnson’s springy legs, his experience and familiarity with the Heat system, and particularly Dwyane Wade and Chris Bosh, is helpful, especially until Wade and Bosh start to click with Goran Dragic. Chalmers is also a willing spot-up shooter, something the second unit needs, with Josh McRoberts and Justise Winslow shy to launch.”

In regards to Andersen, he focuses on Stoudemire’s durability and how an NBA team can never have enough bigs:

“This is really about Stoudemire, whose cheap signing was hailed by fans as great value, a point hard to dispute, but also downplayed by many league insiders who were concerned about his physical and defensive liabilities. If his Heat debut was an indicator—slow feet, little lift, losing his man—Spoelstra will be turning to Andersen and/or Udonis Haslem in no time. For rim protection, behind Hassan Whiteside, he’ll need Andersen. You can never have enough playable bigs, not when Cleveland Cavaliers and Chicago are bringing Tristan Thompson and Andersen Varejao, and Joakim Noah and Taj Gibson, off their benches.”

Skolnick brings up a great point—if the Heat want to be a contender, it is probably in their best interest to retain the two veterans. If they’re thinking of the future combined with their finances, obviously the franchise should look into trading both Andersen and Chalmers before the trade deadline.

What it will all come down to is how this team is playing and what their record will be around the All-Star break. If the team is truly a contender by then, there is little doubt Pat Riley will keep the two battle-tested veterans on the roster.
[xyz-ihs snippet=”Responsive-Ad”]