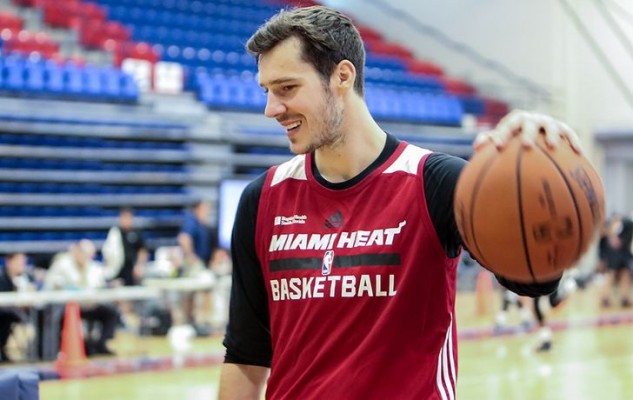 It would be a fair assessment to say that the Miami Heat had a successful campaign this past year.

From dealing with the Chris Bosh situation to Hassan Whiteside’s ill-timed injury during the playoff run, the Heat did a marvelous job maneuvering through the second half of the season, squeaking into the third seed, and even pushing a tough Toronto Raptors team to seven games.

However, the reason the Heat needed a great 19-10 run at the end of season was because of how grossly they had underperformed through the first half of the season. On paper the lineup of Goran Dragic, Dwyane Wade, Luol Deng, Bosh, and Whiteside was projected as one of the best in the Eastern Conference leading up to the start of last season. They definitely didn’t live up to expectations as they stumbled into the All-Star break just five games over .500.

Many point to his success in the second half of the season as one of the reasons Miami was able to unlock another gear on both ends of the floor. Goran’s struggles at the beginning of the season were in all aspects of his game. He was posting mediocre numbers at best for a player of his caliber — just 12.2 points and 5.3 assists per game.

Definitely not the expensive five-year, $90 million player that Heat President Pat Riley double downed on last summer. He would show spurts of his uncanny ability to get into the lane only to end games fading in the corner hoping someone remembered he was available.

Throughout the season and especially during the team’s exit interview, bits and pieces came out of how Dragic was dealing with plenty of tough situations with his family off the court. He had forgone his usual summer schedule of playing with the Slovenian national team to be with his wife during a difficult pregnancy. Due to her travel restrictions, Goran was the only member of his family in Miami for the first couple months of the season. In fact, he hadn’t seen them for a whole three months when they reunited mid-November.

Dragic not playing much basketball during the summer is probably why he showed up to training camp out of shape. Between the difficulties of living without his family and lack of preparation, it’s almost understandable to see where the Slovenian might not have been 100 percent with the team for the first part of the season.

The Heat can’t afford another poor start from Dragic. With huge question marks surrounding Bosh’s health, they are going to need every player under contract to show up game ready in the fall. There can’t be another adjustment period – especially for Dragic.

Riley, in his state-of-the-Heat address to close the season, pointed out Dragic as one of the players he wanted to see improvements from.

“He [Goran] talked about how crazy it was – the trade, his wife was pregnant, couldn’t find a house,“ said Riley. “Goran got his free summer…can’t use that excuse anymore. That’s over.”

Riley challenged him to average 50-40-80 from the field and that’s exactly what Dragic needs to focus on. This offseason “The Dragon” plans to return to his normal summer schedule. He will play with his national team and the Heat plan to send coaches alongside him so he can keep improving his game until the fall. His ability to be rested and game ready come fall will play a large part in determining how the Heat start off next season.

If the Heat get the in-shape, focused Dragic — the one from the stretch run and the playoffs — slashing through the lane aggressively and creating for himself and others, they can hit that next-level offense they found earlier this year. Playing alongside Wade has its challenges and benefits as Dragic learned quickly. But he proved throughout the playoffs that they can play complementary roles for each other as the backcourt averaged 37.9 points per game.

The duo represents a solid foundation piece for the 2016-17 season that will have its fair share of challenges. The Heat team roster could look entirely different by the time training camp rolls around, but one thing is for sure — Goran Dragic will be there. If the offseason goes as planned, Heat Nation will get to see the fiery Dragon in full force when the Heat tip off next fall.
[xyz-ihs snippet=”Responsive-Ad”]

FeaturedGoran Dragicmiami heatNews Ticker
← Previous Story Why Signing Kevin Durant Is Looking More and More Like a Long Shot
Next Story → Top 10 Priorities for the Miami Heat This Offseason: Part 1