Why Dwyane Wade Will Always Be Mr. Miami 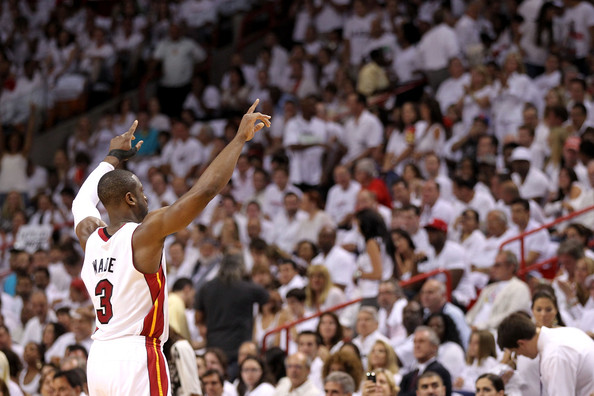 No name is more synonymous with Miami sports than Dwyane Wade. Over the last 12 years, Wade has brought a passion to the South Florida sports community that fans haven’t felt since the 1972 Miami Dolphins went undefeated.

This past July, the Miami Heat front office put all their chips on the table in hopes of securing the 33-year-old guard. Despite a slew of enticing offers from other teams, the man formerly known as “Flash” chose, once again, to stay in Miami. Wade signed a one-year, $20 million contract with the Heat.

Upon finalizing the deal, Heat President Pat Riley had this to say:

“For over a decade, Dwyane has embodied what it means to wear the Miami Heat uniform. He has been the pillar and constant of this organization, and is a true champion in every sense of the word. We are thrilled that Dwyane has re-signed and will lead us as we look to win another NBA Championship.”

Riley’s statement expressed about as much praise as it did relief. It’s no surprise that “The Godfather” rewarded his most accomplished player handsomely. Even before LeBron James came and went, Wade led his team to an NBA Finals victory in 2006, outproducing then counterpart, Shaquille O’Neal, and churning out an MVP caliber year in 2009, all while attracting big name players to join the Miami market along the way.

Aside from his achievements on the court, here are a few reasons why Dade County’s adopted son, Dwyane Wade, will always be “Mr. Miami.”

Wade’s own self interest always seems to take a backseat to the team, which is largely why he is so beloved in Miami. However, this city’s love for Wade really culminated to a peak when fans saw how unselfish he could be on and off the court throughout the “Big Three” era.

When the infamous “Big Three” came together in 2010, Wade agreed to take less money than LeBron James and Chris Bosh, despite being the only one of the trio to tote a championship ring at the time. He even gave up millions to ensure that fellow Heat Lifer, Udonis Haslem, retained a roster spot.

Despite his well documented financial sacrifices, Wade also played second fiddle to James on the court throughout their four-year stint, understanding that the road to the Finals would likely go through the 6’8’’ four-time MVP. Wade commented on this bittersweet epiphany in a 2011 interview with Israel Gutierrez of ESPN:

“Are we going to be good if me and him are both scoring 27 a night? Yeah, we’re gonna be good, but it would be too much, ‘OK, it’s your turn, now it’s your turn.’ I wanted to give him the opportunity where he didn’t have to think about that. I told him, ‘Listen, I’ll find my way. Don’t worry about me. I’ll be there. But you go out and be the player that we want you to be.’”

Away from the game, the Marquette University product is well known for shelling out big bucks to numerous philanthropic endeavors. In 2003, the newly drafted rookie established his Wade’s World Foundation, which provides support to community-based organizations that promote education, health, and social skills for children in at-risk situations.

Since then, he’s donated to the Haiti Earthquake Relief Fund, established a partnership with Alonzo Mourning’s Zo’s Summer Groove and continuously gives to a myriad of worthwhile causes in Milwaukee (where he attended Marquette) and his hometown of Robbins, Illinois.

In 2012, Wade published his memoir, “A Father First: How My Life Became Bigger Than Basketball.” In the book, he details his rough upbringing and how he avoided temptation as a youth. The father of three stresses the importance of family and parenthood and discusses how being a dad has grounded him in ways he never imagined. Many athletes don’t bother with the cumbersome expectations of being a role model. Some attempt to maintain that image and fail. Meanwhile, Wade leads by example and provides the blueprint on how to walk the straight-and-narrow path in a world so full of pitfalls.

The 12-year NBA veteran proves to be a model for success in other areas as well. For over a decade, he’s been an outspoken advocate of encouraging athletes to pursue endeavors outside the sports realm. The lifespan of a pro athlete is a short-lived one and Wade, who has endured his fair share of injury scares, understands that more than most. He has stated in the past his belief that athletes should responsibly pursue other opportunities in order to support their families long after the well runs dry from an athlete’s “playing days.”

You’d be hard-pressed to find anyone who does more for his team, community and family than Dwyane Wade. He’s the ideal representation of what we want from our sports stars. He could have taken more advantageous paths over the years but he continues to walk in a straight line, never wavering from his own beliefs and values. While Wade’s ways have made him a global icon and a bonafide NBA legend, to us here at HeatNation, he will always be “Mr. Miami.”
[xyz-ihs snippet=”Responsive-Ad”]