Why Dwyane Wade Is Still Excelling at an Advanced Age 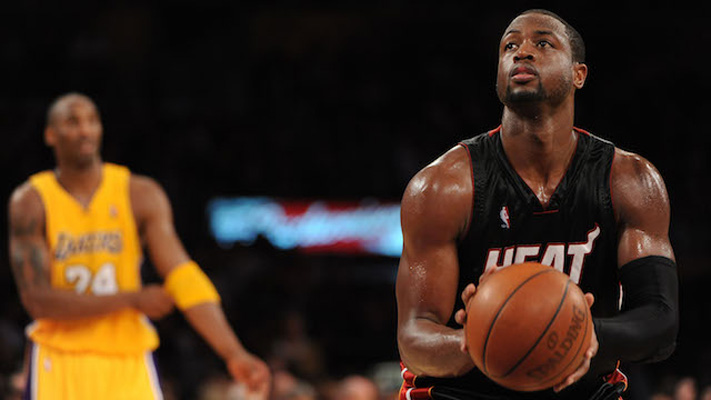 It has been more than 12 years since Wade made his Miami Heat debut as a 21-year-old during the 2003-04 season. Since that time, Wade has helped Miami win three NBA championships and has been a part of the most memorable eras of the franchise.

He literally carried the Heat on his back to the franchise’s first championship in 2006, when he led the team from a 2-0 deficit to defeat the Dallas Mavericks with big man Shaquille O’Neal as his sidekick. Fast forward six years later, and Wade took a backseat to LeBron James while the “Big Three” was still intact to help the Heat win two consecutive championships.

In the midst of his 13th professional season, Wade may not have the athleticism that made him the NBA Finals MVP following the 2005-06 campaign, but he still remains one of the top players in the game.

Through the first 39 games of the season, Wade holds averages of 18.4 points, 4.6 assists and 4.2 rebounds and 45.4 percent shooting in 30.2 minutes per game. He has been injury-free, missing just one game earlier in the year due to the hospitalization of one of his sons.

While those numbers aren’t impressive when compared to the top players in the game such as Steph Curry or James, Wade’s statistical contributions are some of the best of any player at his age. Of players at least 34 years of age, no one is scoring at a higher clip than the Heat shooting guard.

Wade’s legacy is well-defined. He is widely regarded as one of the top four shooting guards of all time and currently leads All-Star voting among all Eastern Conference guards in 2016.

His coach, Erik Spoelstra, comments on why Wade continues to be a top player despite being at an age when most players decline drastically:

“These things don’t happen by accident. I’ve said it before, it’s three-to-one. He’s putting three hours of training to one hour of competition. And he was healthy going into the summer, which allowed him to do that for the first time in a long time.”

Chris Bosh, who teamed up with Wade and James to lead the Heat to two championships and four consecutive finals appearances from 2011-2014, has cited Wade’s ability to adapt as the key for his sustained success:

“He’s constantly redefined his game, stuck with his strengths, did the things that have given him success over the years and added a couple things.”

It isn’t just the fact that Wade continues to produce statistically or that he’s leading a team within a couple of games of second place in the Eastern Conference. What’s most impressive is that the veteran guard took a clear backseat during the “Big Three” era, only to take on the alpha dog role with Miami again once James departed for the Cleveland Cavaliers in 2014.

According to Zach Buckley of Bleacher Report (all stats through January 6th), Wade’s usage percentage, points, assists and field goal attempts per 36 minutes have all increased since the time James left for Cleveland in comparison to his role on the Heat from 2010 until 2014.

One of the key reasons for Wade’s sustained success is that his knees are not bothering him this season. During the 2014-15 season, Wade struggled with lingering knee trouble and bone bruises. He has been able to take more shots closer to the basket and absorb physical contact unlike in prior seasons, as he stated to Jason Lieser of The Palm Beach Post before the New Year:

“There’s even moments it has to click that I can go down there and get all the way to the basket. A few years ago I stopped going all the way and I really used my floater. I don’t really have to use it as much this year. I can get closer to the basket. I’m getting more comfortable with that because I’m healthier than I was. It makes the game a lot different for me. I’m learning this new body right now and trying to figure it out.”

Goran Dragic also cites Wade’s health as the primary reason for his quality play this year:

“He’s taking care of his body and he’s healthy and here you go, you’ve got the result. He’s unbelievable, and he’s mentally strong. Everything he’s thinking to do, he can do it.”

The years and the teammates within the Heat organization may have changed since Wade was drafted in 2003, but one thing has remained constant—the consistent performance of none other than “Flash.”
[xyz-ihs snippet=”Responsive-Ad”]