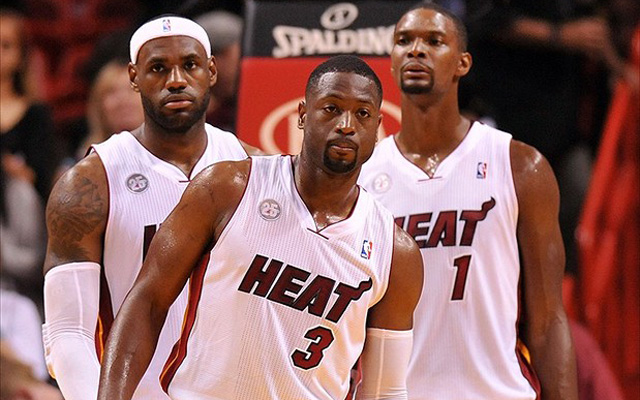 Somewhere deep in the bowels of AT&T Center in San Antonio, LeBron James spent father’s day evening contemplating what this all might mean for the Miami Heat.

It’s hard to argue that the “all-star experiment” that began in 2010 was anything but a success, bringing two championships and NBA relevance back to Miami. James insists that he hasn’t thought about his future at all yet, and that he will take the next few weeks to decide on what comes next.

But from my perspective, that’s a big lie.

There’s no doubt that LeBron has been focused on the task at hand all postseason, pushing questions and ideas about his future off to the side until the Heat’s title defense was through. But to say that he hasn’t thought about it? There’s just no way that can be true.

I’m not buying it, and I’m sorry to bring this up Heat fans, but the dejected look on LeBron’s face during these last two blowout losses reminds me of something I’ve seen from James before, right before he left Cleveland for Miami.

It was a look that says, “I don’t know what more I can do. I just don’t know if this group is capable of making it happen.” And while they have made it happen the two years prior, this roster was incredibly flawed in terms of making a championship run.

They wasted a roster spot on Greg Oden, who gave a meaningful contribution of zilch throughout the entire playoffs. Why does a championship team use a roster spot on a player who they know won’t be able to play at that level? This isn’t the Cleveland Cavaliers or the Philadelphia 76ers taking a flier on a guy in a throw-away season, this is the defending NBA champions we’re talking about.

That was one of the worst decisions Miami’s front office could have made, and we saw the impact it had on this team down the stretch. Miller was a bonafide marksman, a sniper with the ability to make key shots and swing the momentum of the game. The Heat needed more clutch shooting in the Spurs series, and no Miller meant no luck for Miami when they needed it.

LeBron has to look at the decisions that were made this year and question whether Pat Riley is really still doing everything he can to put the best team on the floor year after year. The roster around James this postseason felt more like the 2009 Cleveland Cavaliers than an all-star team built from superstars and effective role players.

I have no doubt that he loves Miami, but loving a city isn’t a reason to stick around, not for someone like LeBron James. The man has one goal and one goal only. Championships.

While this season has made it clear that Miami isn’t the top dog anymore, it doesn’t necessarily mean that James is a goner this summer.

As many of us know, James has a great relationship with the organization and with Pat Riley. I wouldn’t be shocked if LeBron goes to Pat and says “what can we do to keep this thing going?” The Heat are in an incredibly unique situation financially, with Norris Cole being the only player guaranteed a contract going into next season. All three players of the “Big Three” have opt-out clauses in their contracts, and it will be interesting to see how it all plays out.

I highly doubt that all three guys will be willing to take the type of pay cut that it will take to bring another marquee star like Carmelo Anthony to Miami.

Even though he may have chosen winning over money in the past, Wade is clearly on his last legs and he may be signing his last contract this summer. Would he really leave 10+ million on the table to move even farther down on his own city’s totem pole?

My instincts tell me no, and I don’t see Wade taking a considerable pay cut like that just to deal with the same flak that came in 2010. With that being said, I don’t think there’s any way that he ends up anywhere but Miami, as it would be shocking for him to presumably end his career in another uniform.

James and Bosh, however, are different stories completely.

They both have plenty of miles left in them, and both could be looking to change things up next season. James may be looking to join another “ready-made” championship squad, with younger talent and a better opportunity to grow and find sustained success. I’m not sure where that place might be, but we will have a better idea what kind of moves teams are willing to make as the summer continues to play out.

Bosh may be looking to go somewhere that will allow him to flourish in his more traditional role. Bosh became more of an outside shooter this season in Miami, and he may want to play more with his back to the basket and down in the post. If he wants to get back to playing his game, he may be intrigued by the possibility of leaving Miami as well.

If James were to leave, I would rank Cleveland, Chicago and Houston as the top three candidates to land his services. I keep hearing LA but I don’t buy it at all, I don’t think LeBron wants to play with Kobe Bryant. I’m not sure anyone does if I’m being completely honest.

Overall, all three players are in a unique circumstance, and it will be interesting to see if the “ Three” will continue onwards together or end up as a four year experiment that briefly brought championship basketball back to Miami. I’m no psychic and I can’t predict the future, but I can say one thing with absolute certainty.

This is going to be a fascinating summer for basketball fans.