What to Expect from the Miami Heat’s Offseason Additions 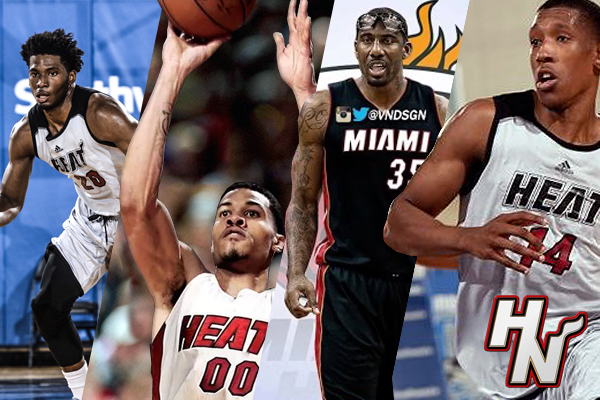 Last year, the Miami Heat failed to make the playoffs for the first time since 2008. It was a tough blow for a fan base that watched their team compete in the finals the previous four years. However, the Heat have taken steps to bounce back in a big way for the 2015-16 season. While Miami’s main focus over the summer was to ensure the signings of Dwyane Wade and Goran Dragic, Pat Riley and company also managed to surround their All-Star core with enough fresh-faced talent to potentially compete for an NBA championship.

Here’s a preview of what to expect from Miami’s key offseason additions:

The team’s shortcomings in 2014-15 landed them the No. 10 overall pick in the 2015 NBA Draft, with which they selected Duke University’s Justise Winslow. Winslow was initially projected to be a top five or six pick, but surprisingly slipped to Miami. He was undoubtedly the steal of the draft. The former Blue Devil and 2015 NCAA champion possesses immense NBA potential, specifically as a defensive stalwart who can guard all four positions. He’s also a relentless rim attacker who plays excellent in transition. Winslow will likely see time at the two and three position for the Heat this year and be relied upon for his versatility.

Greg Whittington was the standout player of the Heat’s summer league squad. He led the team in points (65), rebounds (41), blocks (eight) and three-point field goals made (eight) in nine total games. He is one of a few fringe players that is depending upon his versatility to make Miami’s 15-man roster. At 6’8,” the Heat could use him at small forward off the bench when Luol Deng or Winslow need a breather.

Athleticism and three pointers. The two strongest areas of Gerald Green’s game are the two things the Heat needed most last season. Miami finished the 2014-15 campaign ranked 24th in three-point percentage. Green was a 38% three-point shooter over the last two seasons. Even if that number trends back down toward his 36% career average, Miami still sorely needs a high-energy scoring guard to back up the oft-ailing Wade. There’s a strong chance that Green winds up as the most productive bench player for Miami in 2015-16.

The Heat took Josh Richardson with their second pick in the 2015 NBA Draft after he played four solid seasons for the University of Tennessee. In his final season as a Volunteer, he averaged 16.0 points, 4.5 rebounds, 3.6 assists and 2.0 steals per game. He managed all this while shooting 36% from three and 80% from the line. He continued to produce in summer league play.

Ira Winderman of The Sun-Sentinel observed the following last July:

“The second-round pick out of Tennessee was nothing short of a revelation, a picture of confidence whether cast at point guard or on the wing.”

Miami recently signed Richardson to a three-year, $2.5 million rookie contract. They expect him to earn some playing time.

After a slew of subpar, injury-riddled seasons, Amar’e Stoudemire believes he can return to All-Star form. It’s been a few years since Stoudemire was one of the most dominant big men in the NBA but the 6’10” power forward still averaged 11.5 points and 5.6 rebounds last season. That’s a far cry from the numbers he put up in his prime, but more than solid for a guy expected to play 15-20 minutes backing up Hassan Whiteside. Stoudemire is a potential Hall-of-Famer who can contribute as a rim protector and scorer in 2015-16 if he can stay healthy. Naturally, “if” is the operative word.

Another three-point specialist — last season Corey Hawkins led the entire NCAA Division I with a staggering 48.8% from beyond the arc. Hawkins is a 6’2” combo guard with a knack for scoring in his DNA. His father, Hersey Hawkins, played 13 seasons and is currently ranked 45th among all-time three-point leaders. Hawkins is a flat-out shooter but it’s his lack of size and a proclivity for turnovers that will make it tough for him to land a spot on Miami’s final 15-man roster. Only time will tell.

After being drafted by the Atlanta Hawks in 2011, Keith Benson spent most of the last few years overseas and in the D-League. Most recently, he helped lead the Orlando Magic to the Summer League championship game. Benson is a power forward/center with considerable size and length but he’s a long shot to make the team, especially given the Heat’s depth at the position.

With these additions, Miami’s front office, led by Riley, patched up the holes that plagued the team in recent seasons. With a projected starting lineup of Dragic, Wade, Deng, Bosh and Whiteside, and a seemingly dominant bench, the Heat have a clear shot at the Eastern Conference Finals in 2015-16.
[xyz-ihs snippet=”Responsive-Ad”]