Don't Miss
Home / Editorials / What to Expect From Hassan Whiteside Heading Into 2016-17, and Why He Will Dominate

What to Expect From Hassan Whiteside Heading Into 2016-17, and Why He Will Dominate 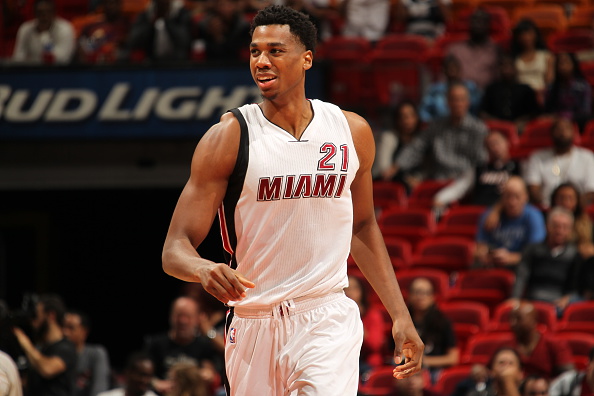 The 7-footer is coming off a 2015-16 campaign in which he led the league in blocked shots and finished third in Defensive Player of the Year voting. The award ultimately went to Kawhi Leonard of the San Antonio Spurs, despite the fact that Whiteside had the best defensive rating in the NBA.

“I’m used to not getting credited for anything. I’m used to getting overlooked,” he said after finishing third last year. “I’ve been looked over my whole life.”

Though he may have been overlooked last season, it will be very hard to miss him in 2016-17. Whiteside signed a four-year, $98 million contract with the Heat this offseason and is expected to be a top performer for Miami in the team’s first season in 13 years without Dwyane Wade.

Whiteside’s rebounding ability and defensive prowess have been established, but it’s his offense that will need to improve if he is to become a truly dominant player. Naturally, improving one’s game takes hard work and dedication and, according to Heat head coach Erik Spoelstra, Whiteside is putting in the work:

“He will be working on all of it,” Spoelstra said last week in a video released on the team’s website. “Low-post scoring, that’s the number one thing he wants to work on, and I’m all for it. He will also work on his skill level at the top of the floor, handling the ball, getting us into second situations as a playmaker, rebounding off the glass.”

The Heat shelled out max money for Whiteside, so it’s comforting to know that he isn’t taking his situation for granted. Instead, he’s working every day to get better. In fact, Spoelstra is so impressed by Whiteside’s work ethic that he believes his starting center can take his game to a whole new level next season:

“I was very impressed with Hassan’s motivation, his work ethic. He wants to be great. He’s not afraid of putting in the time, either. I’m not going to stand in his way and put a ceiling on where he can go and who he can become as a basketball player,” Spoelstra said. “I want him to be one of the best players in this league. He has that type of potential.”

Here’s a look at Whitesides scoring numbers throughout his time in a Heat uniform:

In Whiteside’s first season with the Heat, he played 48 games and averaged 11.4 points per game. Last season, he brought that up to 14.2 points per game. He also improved at the line, increasing his free-throw percentage from .500 to .650.

In the games following the 2015-16 All-Star break, Whiteside averaged 17.5 points while shooting .750 from the charity stripe, which helped stave off a Hack-a-Whiteside strategy. Throughout his time in a Heat uniform, he’s continually found ways to improve his scoring. That trend should continue moving forward.

The Heat’s prized big man looks to get a lot more touches without Wade dictating the offense in 2016-17. Plus, if Chris Bosh misses extended time again, the onus will be on Whiteside to make most of his offensive plays in the post and produce at a high level down low. He will no doubt become the “go-to” guy on offense at times.

The 27-year-old will also be playing more minutes in 2016-17. Last season, he was only playing 29.1 minutes per game and spent the latter half of the season coming off the bench behind veteran Amar’e Stoudemire. Somehow, he still managed to post double-digit scoring and grab 11.8 rebounds per game. In the upcoming season, Whiteside will be the clear-cut starter and will play more minutes than he ever has in his short NBA career:

“He will have to be able to absorb more minutes, more responsibility, more games,” Spoelstra stated in the team-produced video.

If you consider all these factors, there’s really no reason why Whiteside can’t average close to 20 points and 12 rebounds per game next season.

DeMarcus Cousins and Anthony Davis were the only big men able to average 20+ points and 10+ rebounds per game last year. Don’t be surprised if Whiteside joins that exclusive 20-10 club in 2016-17, though. At this point in his career, he has the talent, skill and perfect opportunity to do so. Throw in the the fact that he’s the best shot-blocker in the game, and you’re looking at one ascendant force in this league.

“You’ve all seen him play, he can absolutely dominate a game,” team president Pat Riley told the media after re-signing Whiteside last July.

Domination is exactly what Heat fans can expect from Whiteside next season. Besides, you know the shot-blocking menace will bring his “A” game to every contest so he can continue to get his NBA 2K rating up.
[xyz-ihs snippet=”Responsive-ImagenText”]