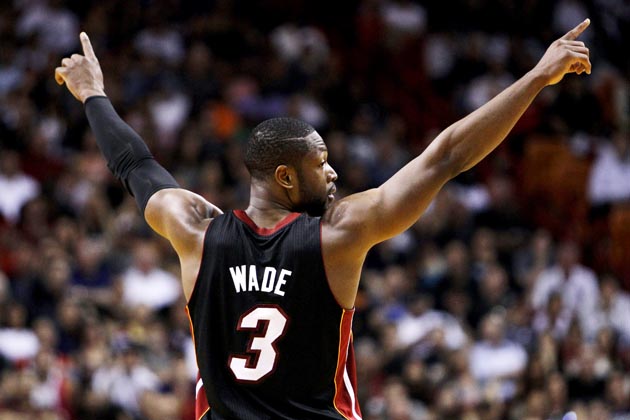 Dwyane Wade didn’t pout, nor did he express sorrow after watching his best friend leave his side to return to his old stomping grounds in Cleveland. The three-time NBA champion remembered the glory of his first championship in South Beach, a victory claimed without LeBron James, without a Big Three and without any doubt that he alone is a force on the basketball court. Wade acknowledged James for going back home because he too went back home, to a franchise that has done well following James’ departure.

However, he comes home with a chip on his shoulder, a reason to show why hope remains high towards another title run for the Heat, despite losing arguably the game’s best player. But with that chip comes with an injury bug that was a moderate problem when James was on the team. Without James, it is an immediate problem. Despite the return of All-Star Chris Bosh and the addition of several key free agents like Luol Deng and Danny Granger, Wade’s strengths and weaknesses on the court make the difference between the Heat remaining among the league’s elite teams or being just another squad that is a lot of hype with no June hardware to show for it. Wade at full strength can place the Heat at the top of the Eastern Conference, ahead of James and his young, yet promising Cleveland Cavaliers. Wade with creaky knees can have the Heat vulnerable, weaker and, most of all, irrelevant come playoff time.

There was no doubt that the wheels kept spinning for the Heat when James led the charge with an injured Wade on the bench. Miami still won games, still amazed the fans and still intimidated several Eastern Conference foes while Wade saw the power and prowess in his legs deteriorate over the last four years. The Heat boasted a 47-17 record in his absence during the Big Three era, an astounding win-loss ratio without a player the caliber of Wade. However, the Big Three are no more. Wade deferred to James during their time together when it came to offensive production and commanding the huddle. But Wade’s skill set never left him, though, because his worst year of the title-chasing era was a 19-point-per-game, 54 percent shooting clip in a mere 54 games last season.

Remember, Wade began his career as a point guard (rookie year), then became the star guard on the team two seasons, an NBA championship and a Finals MVP later. He’s used to controlling games on both ends of the court, evidenced in his career six assists per game and three All-NBA Defensive Team honors. But his grip on the Heat’s temperament and competitiveness stands out even more for this franchise, as Heat teams are 40-63 without Wade in the lineup from 2003-10, 262-209 with him during that span. The daunting contrast in success rate is something not to ignore, especially considering how Father Time is beginning to follow the 32-year-old Wade. 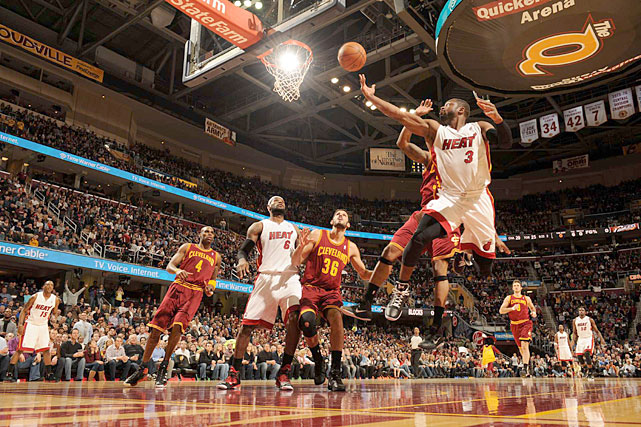 How much Wade has left in his tank remains to be seen, but will determine whether or not the Heat can match front-running teams like the Chicago Bulls, Indiana Pacers and the James-led Cavaliers in the East. Wade didn’t exactly go down admirably in defeat during the NBA Finals rematch with the San Antonio Spurs, as he appeared tired and worn down while trying to keep pace with Danny Green and Manu Ginobili. Even then-Pacer Lance Stephenson had him running in circles attempting to outdo the younger star during the Eastern Conference Finals. His uninspiring play during the postseason could be attributed to the simple wear-and-tear of being a defending NBA champion, but the next season will be anew with a motivation to detract doubters who believe that Wade’s best days are behind him. Truth is, Wade’s best days will come and go, but not disappear because of how efficient he has remained with his scoring, as he’s shot at least 47 percent in six straight seasons. The last thing to ever leave a ball player is his jump shot. Wade shoots better than most guards and as good as any player in the league. He’s one of a handful of players in the NBA that one shouldn’t bet against when it comes to killer instinct. That killer instinct has his sights set on besting his best friend and former teammate next season.

“Well, it used to be Kobe Bryant…the second best of all time,” Wade told SB Nation’s Windy City Gridiron when asked who is his favorite NBA player to compete against. “Now, I have a new player to play against…my former teammate, LeBron James.”

Wade’s words about James should certainly serve as the benchmark of the Heat’s post-LeBron resurgence. Moreover, his words will be tremendous for his ability to lead this new lineup. Bosh is a stud, but has never been a spearhead in the locker room. Bosh may benefit more from James’ departure, in regards to offensive production, but Wade’s versatility and big-game mentality empowers the championship picture. Besides, it was Wade who commandeered the formation of the Big Three by recruiting James and Bosh. It was Wade who pulled the Heat together after trailing 2-1 to the Pacers during the 2012 Eastern Conference Semifinals, averaging 33 points per game during a three-game run without Bosh (out with an abdominal strain) to win the series, 4-2. It is Wade who will push the Heat above diminished championship expectations this season if he leads successfully, while Bosh follows effectively.

Heat Head Coach Erik Spoelstra will have to look closely at how Wade’s minutes will be monitored for the upcoming year, but he must remember how much the dynamic playmaking of James often determined wins and losses during the Big Three Era. Wade must return to the playmaking threat that pushed talentless rosters in 2009 and 2010 to the playoffs. This current roster has the potential to not only win the Southeast Division, but also conquer the East. Wade spent last season avoiding back-to-back nights in order to keep his knees fresh, but will need to summon the endurance to compete effectively and consistently for an 82-game season. The league’s best teams all have talented guard play. Wade’s presence on the court makes or breaks the other Heat guards on the team, all of which are either unproven or lacking the attributes to rise to the occasion in critical games.

“Flash” makes for the perfect nickname for Wade at this juncture of his career. The Heat’s title hopes for next season could be a flash in the pan if Wade’s knees can’t handle the burden without James. However, if “Flash” is quick to the hoop and even quicker in re-establishing his dominance on the court, Miami could reassert its hold on the Eastern Conference in a flash.