Top 5 Performances by a Miami Heat Player on Christmas Day 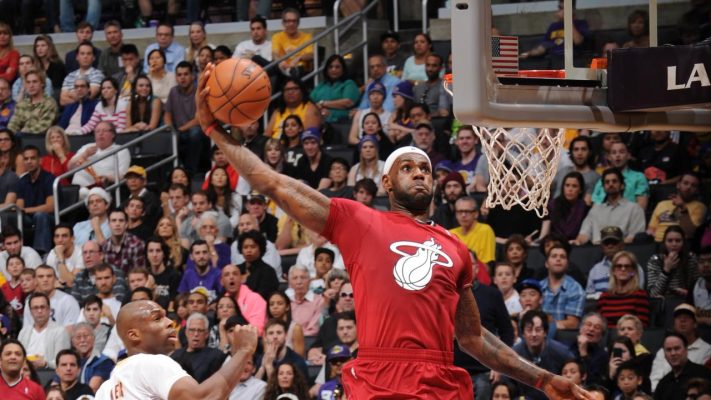 The Miami Heat have played a total of 12 times on Christmas in their franchise’s history, compiling a 10-2 record. In those games, there have been plenty of outstanding performances from a number of Heat players.

Here’s a list of the top five performances by a Heat player on Christmas Day:

In a rematch of the 2012 NBA Finals, James and then-Thunder forward Kevin Durant went against each other the entire game, making for an exciting head-to-head battle.

James had an extremely efficient and well-rounded game, shooting 12-of-20 from the field and 5-of-5 from the free-throw line while flirting with a triple-double to lead the Heat to a 103-97 victory. Miami would finish the season as NBA champions for the second straight season, beating the San Antonio Spurs in the NBA Finals.

This was the first game back in Miami for James after his return to the Cavaliers, and Wade spoiled his return with an amazing performance, which was highlighted by his dunk over Kevin Love, in a 101-91 Heat win.

The victory against the Cavaliers was one of the few high points for the Heat in a season where they finished 37-45 and missed out on the playoffs.

Having started the season 8-7, the Heat righted the ship and reeled off 14 wins in their next 16 games, leading up to the primetime matchup against the Lakers.

Miami went to Los Angeles and got a statement win led by James, who made five 3-pointers and recorded a triple-double. This was the first year of the “Big 3” era and the Heat wound up reaching the NBA Finals, where they shockingly lost to the Dallas Mavericks in six games.

Due to the lockout that took away 16 regular season games, the 2011-12 NBA season got underway on Christmas Day with a rematch of the 2011 NBA Finals. James and the Heat came out strong, imposing their will on the Mavericks throughout the entire game.

James and Wade were the only two Heat players to score in double figures, combining to score 63 of the team’s 105 points. Although the final score was somewhat close (105-94), the result of the game was never really in doubt. This game set the tone for a special season as Miami would go on to defeat the Oklahoma City Thunder in the NBA Finals to win its second championship in franchise history.

This 101-85 win against the Lakers was one of the only good points for the Heat during 2006-07 season. Wade was everywhere this game, going 12-of-20 from the field and 15-of-16 from the free-throw line, setting up his teammates and playing phenomenal defense in 41 minutes of action, leading the Heat to an easy, much-needed victory. Miami had lots of ups and downs during the season, which culminated by getting swept in the first round of the playoffs by the Chicago Bulls.
[xyz-ihs snippet=”HN-300×250-TextnImage”]