The Playoff Picture: Breaking Down the Miami Heat’s Potential Seeding and Matchups 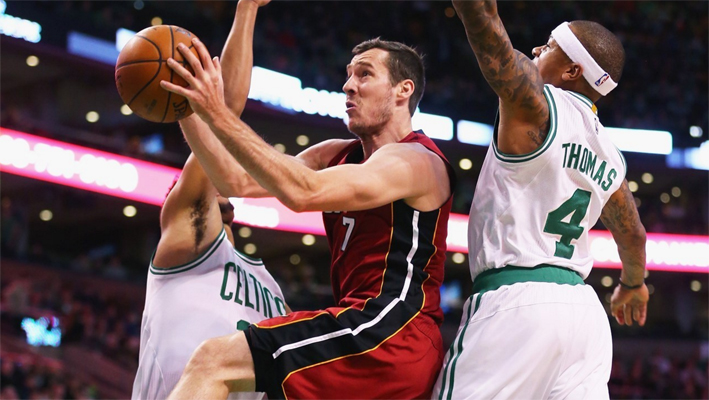 As it has been for some time now, the Eastern Conference playoff race is as tight as it gets. The current three through six seeded teams are all within a game and a half of each other and it’s anyone’s guess as to where they’ll each end up.

The one and two spots are locked up, but after that, it’s a full-fledged free-for-all. The Miami Heat have five games left to play and will need to finish with the third or fourth spot in order to gain home-court advantage.

If the playoffs started today, Miami would face off against the Boston Celtics, who have already won the season series against Miami even if the Heat win their final matchup on April 13th. If the Heat do face the Celtics, it would likely be problematic for Miami, as Boston would maintain home-court advantage.

How important is home-court advantage in the first round, particularly for a team with two rookies in their primary rotation?

Dwyane Wade spoke with Ethan J. Skolnick of The Miami Herald about it:

“It would be great to get started on home court with the mix of teams that’s playing and really counting on younger guys. I remember my first playoff series, the reason we won it was we had home court, we won all four games at home. It would be good for us. If you want to be successful in the playoffs, you have to win on the road, no doubt about that, but to start off, we would love to get that position, you know, but it’s on us and how we take care of our business.”

If Miami could inch up to the four spot and nudge Boston down to the five spot, Miami would enjoy home-court advantage, which would likely wind up being the deciding factor in this potential matchup.

There are many similarities between these two teams. Like the Heat, the Celtics play efficient team basketball with a heavy focus on defense. Boston ranks fifth in the NBA in opposing field-goal percentage, while Miami ranks ninth.

Meanwhile, Boston’s half-court game is amongst the best in the East and, while their big men aren’t dominant forces, they tend to make their impact known down low, particularly when guards Isaiah Thomas, Evan Turner and Avery Bradley are getting them involved. Frankly, Boston can run with anyone. They recently beat the Golden State Warriors in Golden State, a feat that seemed next to impossible before they made it happen. They also have a quality win versus the Cavaliers in Cleveland. This is a matchup the Heat should hope to avoid altogether.

What about the currently third-ranked Atlanta Hawks?

The Hawks are certainly surging as of late. They seem to be back to playing the way they were last year when they finished as the number one seeded team in the East under 2015 Coach of the Year Mike Budenholzer. However, Miami had it’s way with Atlanta all season long. They own the season series three-to-one and match up well with them at most positions. With no Chris Bosh, though, Al Horford may give the Heat trouble down low. Luol Deng will have to step up if Erik Spoelstra plays him at the four spot throughout that series.

In addition, the Heat may favor this matchup due to the ease of travel schedule. The flight from Miami to Atlanta is less than two hours. That means more time for rest and practice, which would likely be advantageous for Miami. It wouldn’t be the worst thing in the world for Miami if they fall to the six seed and have to face the Atlanta. It may actually be favorable.

As for the sixth seeded Charlotte Hornets:

Chauncey Billups on East Playoffs: “I wouldn’t want to play the #Hornets. They have it all. They defend. They have a coach & a closer.”

The great Chauncey Billups has a point. The Hornets, despite not being on the national radar, are a very good team. Led by Kemba Walker and company, the Hornets are capable of putting up 15 three-pointers a game and Miami has trouble defending beyond the arc.

Charlotte has a bit of everything: solid guard play, veteran leadership, a low-post presence with Al Jefferson and the surging Cody Zeller, ball movement, and solid defense. This matchup will likely come down to how well Goran Dragic and Hassan Whiteside can cover Walker and Jefferson, respectively. Another thing to watch for is the performance of Nicolas Batum, who tends to get hot in big games.

The season series is tied at two apiece between Miami and Charlotte, but Miami holds a heavy advantage when it comes to playoff experience and that would likely be the difference.

Whomever Miami winds up facing in the first round, one thing is guaranteed: it’s promised to be one of the most competitive first-round series we’ve seen in a long time. Don’t be surprised if the Heat go to Game 7 in round one.

Now, if Bosh makes a surprise return, it will be tough to tell how things will play out, but as of now, Miami is not relying on him any time soon. If the Heat hope to make it out of the first round, they will have to depend largely on Wade, Whiteside, above-average ball movement and, of course, stellar team defense.
[xyz-ihs snippet=”Responsive-Ad”]