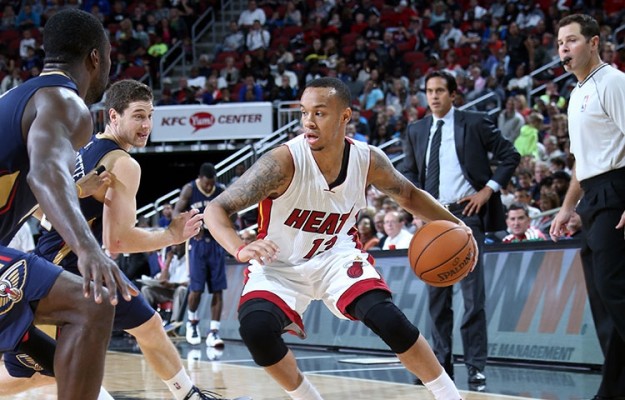 Those are just a few of the murmurs and half-joking remarks you might hear in the stands of the American Airlines Arena when Shabazz Napier steps on the floor. Once the fans know who he is though, it’ll eventually stop, but of course, people often judge a book by its cover.

During an incredible 2014 NCAA Basketball Tournament that saw the University of Florida Gators as healthy favorites to win it all, most were shocked when a rather unassuming and unintimidating UCONN team came out of nowhere and tackled seemingly more talented and tougher teams (including the Gators) en route to one of the best March Madness finales we’ve seen in some time.

At the helm of this incredible team of underdogs was head coach Kevin Ollie, but his executive officer and floor general was none other than Shabazz Napier. As a whole, the Huskies played fearlessly and with decisive execution, but it was Napier who seemed to set the tone. Standing about 6’ tall, Napier made up for his lack of height and athleticism with intelligent plays, clutch shots, and making magic out of nothing. There’s nothing otherworldly about his physical frame, but when you see him play you begin to understand what makes him so special.

Aside from his play on the floor, he made a name for himself with his outspokenness and hunger—literally. In a now infamous postgame interview, Napier recalled that he and many other NCAA athletes would go to sleep at night hungry from being unable to afford food, you know, being student-athletes and all. His interview catalyzed a revamped NCAA meal policy, and it emphasized a recurring theme—this man is hungry. If that wasn’t enough, he’d already made some people mad by proclaiming,

“Ladies and gentlemen, you’re looking at the hungry Huskies, this is what happens when you ban us!”

The statement was in reference to UCONN being banned from NCAA competition due to sanctions, and he said this while the ticker-tape was still fluttering from up above.

Months later, Napier is a long way from the hoopla and acclaim that surrounded him in the NCAA tournament, but those that remember him still see the hunger in his play. Now, in a Miami Heat uniform, Shabazz is still making plays.

In their highly anticipated preseason game against the Cleveland Cavaliers, Shabazz sunk two massive free throws in the waning moments of regulation that would tie the game and force overtime in a thrilling contest, and he finished the game as the Heat’s third leading scorer with 16 points, seven assists, three boards, and a couple of steals.

Despite a lot of missed shots down the stretch, it reinforced his fearlessness and willingness to make the right plays. He will make more of those than miss, but sometimes the ball just doesn’t bounce your way.

And again, in the Heat’s most recent preseason contest against the Atlanta Hawks, Miami found itself trying to play catch-up. After blowing the lead in the first half, Miami found itself in a big hole in the waning minutes of the contest. Miami never dug its way out of that hole, but you could still see the flashes in Napier’s game as he and the rest of his squad desperately tried to win.

In the fourth, he made a fantastic assist after driving the lane and hitting Chris Andersen with a crisp lob, and on a separate play, he beat his man with a beautiful pull-up-off-the-crossover shot. We were witnessing vintage Shabazz right before our eyes in the most crucial of moments. Napier would go on to cap a stirring near-comeback with a three-pointer that resulted in a deafening roar from the entirety of the Miami crowd. Although the Heat cut a 20-point Atlanta Hawks lead down to only four, they still came up on the losing end for the fourth consecutive preseason game so far. Despite the loss, it was another example of Napier’s ability to convert when it matters most, and shocker, he still isn’t afraid to pull the trigger in key situations.

There’s no question that intangibles stay with you forever, but to know the talent and ability is still there as well, it’s reassuring as a Heat fan. Many questioned whether his lack of elite athleticism would present tremendous problems at the next level, but it’s clear Napier is doing a fine job of overcoming the odds. He did it before, and there’s no doubt he’ll do it yet again, just as he’s always done.
[xyz-ihs snippet=”Responsive-ImagenText”]