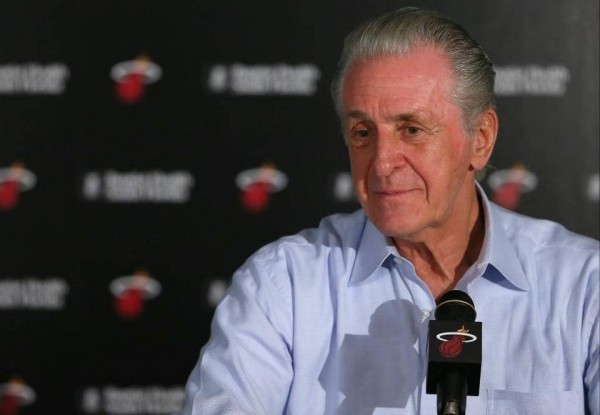 “In Pat we trust” is a relatively well-known phrase used amongst longtime Miami Heat fans. It’s essentially an acknowledgement of what Pat Riley has done for the Heat in the past and what he’s capable of pulling off in the future.

The Heat have been down and out before, no question, but whenever they seem to reach their lowest point as a franchise, that’s when Riley pulls out all the stops, flips the script, and makes a series of moves that catapults Miami to the top of the basketball world.

In a recent interview with WQAM’s Joe Rose on his radio show, Riley acknowledged that the 2016-17 season has been frustrating, to say the least, but also reflected on how past “down times” in the franchise’s history ultimately led to soaring new heights:

“We’ve done this twice,” Riley told Rose Wednesday morning. “Basically we had to do it in 2001 when Alonzo Mourning went down with a kidney ailment. So we had two tough years which produced Caron Butler and Dwyane Wade and also Lamar Odom in free agency. That started that rebuild that turned into Shaquille [O’Neal] and the championship and the Big 3.”

While Riley used the past as evidence of hope for the future, he also addressed the undeniable frustration that is currently setting in amongst the fan base and within the front office:

“Obviously right now we’re all a little bit disappointed with our record.”

Riley went on to put things into perspective:

“But – and this is not old coach speak or just trying to put a positive slant on things – but I’m really proud of this young team and these guys that have come in and they’ve really bought in. They’ve worked hard,” Riley said. “We’ve been in 13 close games and there’s at least five more wins in this team that would put us at .500. We lost last night in a double overtime game we probably should have won. We don’t want to keep regurgitating the same things, but we’ve got a lot of young players that are growing that need to step up, they will emerge. We will find the ones I think over the next six to seven months that will be a part of this team for a long time.”

While Riley may have a point about the games the team “should have won” or how close the scores have been in many of the Heat’s losses this season, it seems the main argument he’s trying to make, and what he wants the fans to understand, is that the team is headed in the right direction and that’s the most important thing.

However, Riley also understands that if change is to come, then it must arrive sooner rather than later:

“I’m not going to hang around here for three or four years selling this kind of song to people in Miami. We have great, great fans. They’re frustrated. They’ve been used to something great over the last 10 years and so right now we’re taking a hit. I think we can turn this thing around. You can use that word rebuild. But we’re going to do it fast.”

Riley then went on to praise his young nucleus of players, pointing to them as a sign that the franchise won’t be down for long, as long as the right pieces are added around the current core guys:

“You go back and you look at it, we’re in a rebuild with young players that we’re familiar with and we have five or six guys that we really like. They will form a nucleus, two or three of them. Tyler Johnson got 32 points coming off the bench and Hassan [Whiteside] had 32 [points] and 15 [rebounds in Tuesday’s double overtime loss to Orlando]. We have some very good young players. Justise Winslow and Josh Richardson, they have been thwarted by their injuries. Justise missed [16] games [with a wrist injury]. Josh missed seven weeks with an MCL [sprain]. So, they’re a little bit behind, but we love our young core.”

It’s true; Miami’s young core has been quite impressive this season, despite the team’s losing record. Johnson, who signed a four-year, $50 million deal with the Heat in the offseason, is averaging 13.4 points, 3.1 assists and 4.6 rebounds per game for the Heat this year.

Meanwhile, Goran Dragic is having the best season of his career. The Slovenian point guard is looking more and more like Steve Nash everyday. He’s taken the reigns of the Heat offense and is averaging 22.0 points, 6.8 assists and 4.8 rebounds over his last 10 games.

Whiteside is also shaping up to be a very special player in Miami’s frontcourt, and Riley acknowledged as much while on the air with Rose:

“He’s a double-double machine,” Riley said. “There’s no doubt. And there’s going to be nights with the triple-doubles when you add in the blocked shots. He’s averaging 18 and 19 a game, leading the league in rebounding, shoots 58 percent.”

There’s no doubt Dragic and Whiteside look like very promising centerpieces for the team’s current and future successes, but Riley seems particularly invested in the growth and potential of second-year swingman Winslow:

“He’s a Udonis Haslem type of player,” Riley said of Winslow. “He’s a 6-7 1/2, three-position player. He can guard maybe four positions on the court. He’s a defender right now from that standpoint. He’s a rebounder. He makes winning plays, has a winning attitude. Right now, he’s shooting the basketball. He’s going to have to find his game, find his stroke and he will. I don’t think there’s any doubt that will come with his game. If people are concerned about him, they should be concerned in a positive way because he’s only 20 years old. So, we love Justise.

“It’s just a matter of time. That’s all it is. Having that wrist injury this year was the real deal. It’s [16] games he missed. And because of how he plays and how he lands I think the one thing we’re going to have to teach him how to fall. Dwyane [Wade] used to hit the floor all the time, but he learned over the years how to fall by not using his hands. There’s a lot of things he’s going to learn in this thing. But we feel very good about him as a winner.”

Aside from the current personnel, the first-round draft pick (likely a top-10 lottery pick if Miami continues to accumulate losses at the current rate) that Riley mentioned early on in the radio interview may wind up being the biggest key to the Heat’s future success. This summer’s draft class is said to be a very strong one, with a high number of potential difference makers.

The Heat are also likely to be free of Chris Bosh‘s massive salary this summer, which will afford them the luxury of pursuing high-level free agents in the offseason. All these factors, the team’s strong core, the first-round pick and the massive amount of breathing room Miami will gain by unloading Bosh’s contract seem to be the reasons Riley is so confident that the Heat will bounce back in a major way before too long.