Norris Cole Vows to be More Aggressive This Season 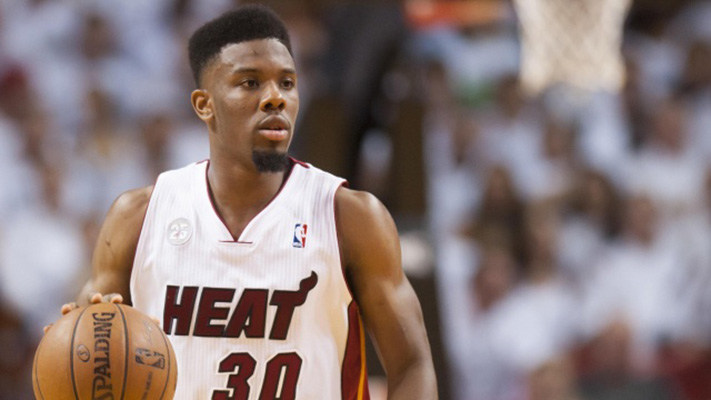 The Miami Heat are going to need all of the scoring they can get this upcoming season. Norris Cole just might be the guy that can help them in that department.

The Heat are going to have to replace 27 points per game now that LeBron James is in Cleveland. If Cole is to help in alleviating that loss in scoring, he’s going to have to do better than the 6.4 points per game and 41 percent shooting he provided last season. The fourth-year guard is well aware of that fact, according to Shandel Richardson of The Sun Sentinel.:

“We had so many playmakers (last year) that there were times I deferred to let these guys make the plays. They were great at it….But I also saw plays where I could have been more aggressive to attack.”

While the point guard did struggle last season, and was largely a non-factor during the postseason run, his point does hold merit—Cole, along with other players such as Mario Chalmers, Chris Bosh and even Dwyane Wade—had to tone down their aggressiveness on the offensive end due to the four-time MVP’s presence. Not only that, but any time a Heat player not named LeBron or Wade missed a couple of shots consecutively, they were phased out of the offense for the rest of the game.

In regards to his role on offense over the first three years of his career, Cole stated:

“I wasn’t really asked to do that much offensively. The talent level that we had around us and being a young player, you just want to play your role hard and be the best at your role. Some nights offensively I was able to be more aggressive but other nights I just played my role.”

Wade sees the improvement in Cole thus far during training camp in comparison to last season, making the following statement:

“He’s gotten better individually for sure. He had a hell of a summer working out and getting prepared. Defensively, he’s a monster. The next wave for him is how to be effective as a point guard. He’s going to have to figure out the perfect way to do that. It’s not always easy for guys, but if he can figure it out he can be very dangerous for us.”

At the current moment, the starting point guard position is up for grabs between Cole, Chalmers, and rookie Shabazz Napier. With James gone and the Heat desperate for scoring, 2015 might be the year for the Cleveland State product to finally break out.

“I feel as prepared as I’ve been prepared coming into the season. I’m as confident as I’ve ever been skill-wise and physically…..obviously, I always wanted to start. For the team success, I’m willing to play whatever role I have to play in order for us to win. I put winning before my individual goals. I always want to win no matter what,” Cole said.

With the Heat running a more team-oriented offense next season, and with the point guard situation as dire as it is, the fourth-year point guard will have every opportunity to be more aggressive.
[xyz-ihs snippet=”Responsive-ImagenText”]