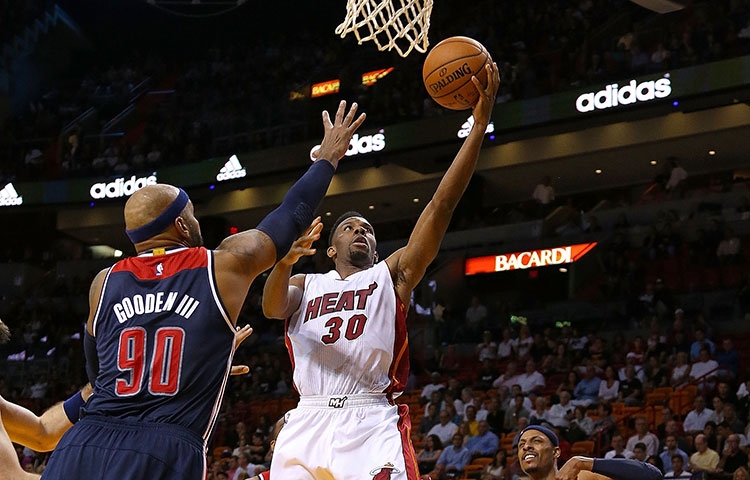 While Norris Cole made the biggest splash on opening night for the Miami Heat by raining long-distance shots, another player answered the question of who is to be the team’s new offensive centerpiece.

“Offensive freedom and stuff, that’s easy,” Bosh said about his increased role on offense. “I had to step back because of Dwyane (Wade) and LeBron (James), we needed to get those guys going.”

With LeBron gone, Bosh is now the Heat’s offensive anchor, and the team unveiled how they plan to use the big man on opening night. Instead of clearing out the lane for a driving LeBron, the Heat will now spread the floor with shooters for Bosh to work one on one in the high post, daring opposing centers to guard Bosh in space. From there, as Bosh says, it’s easy.

A perfect example of Bosh’s game came in the Heat’s final preseason game, as Bosh was guarded by 2013 defensive player of the year Marc Gasol. With a simple pump fake, Bosh gets Gasol off his feet and takes his opportunity to blow by the Memphis big, running to the basket for an easy layup.

With one of the best mid-range jumpers in the game, Bosh can drain shots when given space or drive the lane when closely guarded. Bosh’s low post game will also be unearthed this year, providing even more opportunities for single coverage. In Toronto, Bosh averaged almost an assist per game more than he did on the Heat. As the Heat’s top option, Bosh will have plenty of chances to find open shooters from the high or low post.

The Heat’s second option on offense is equally dangerous. On opening night and in the preseason, Coach Erik Spoelstra ran several plays designed to give Dwyane Wade a clear path to the basket. As a Heat player screened Wade’s defender, Wade had the ability to drive to the basket or find the open man. In the preseason, Wade executed to perfection, getting to the rim time and again and looking like the ‘Flash’ of old. As a premiere post-up guard in the NBA, the Heat will also utilize Wade extensively in the low post, as they did on opening night when Wade pump-faked in the paint for a tough layup against two Washington Wizards defenders. Wade’s perimeter game will also be in high demand, as Wade was called on to knock down mid-range jumpers when plays broke down against the Wizards and in the preseason.

While Bosh and Wade will lead the way, the rest of Miami’s players will not just be sitting back waiting to hit corner threes. In addition to spacing the floor, Spoelstra has players like Luol Deng, Mario Chalmers, and Norris Cole cutting to the basket, looking for easy layups. Even Shawne Williams and Danny Granger, whose primarily roles on offense are to replace former Miami Heat swingman Shane Battier in the corner, will be called on to find the holes in the defense.

The Heat’s revamped roster also has a number of secondary ball handlers, including Cole, Mario Chalmers, and Shabazz Napier. While Cole will officially be running the point as the starter, Chalmers will be called on to make even more plays as the Heat’s sixth man, especially when Wade hits the bench.

Andrew Meyer writes about sports, music, film, politics, and law. He has been a staff writer for the Sun Sentinel, Photography Is Not A Crime!, and WeAreChange.org, and known internationally for questioning John Kerry and coining the phrase, "Don't Tase Me Bro!" You can follow him @TheAndrewMeyer.